The many faces of Beta-hydroxybutyrate (BHB) 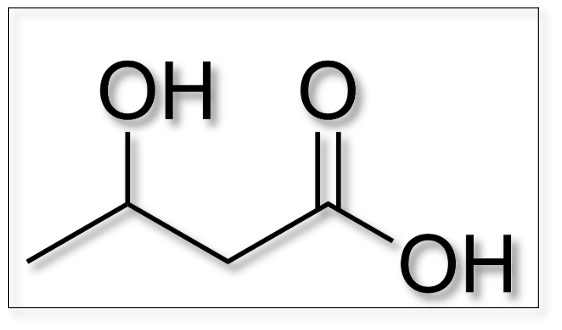 Unless you’ve accidentally stumbled upon this blog article (in which case, welcome new friend!), you likely already read about the many benefits of ketones and ketogenic diets. Considering that some benefits of ketogenic diets are attributed to ketone bodies themselves, today’s blog will focus on our main ketone body, beta-hydroxybutyrate (aka BHB). Keep reading to learn more about its biochemistry, physiological roles, and exciting new developments in the area of ketone supplements. Note: there are a variety of names for ketone supplements (not to be confused with “raspberry ketones”!) in the literature (and product marketing), including “exogenous ketones”, “ketone salts”, “BHB salts”, “beta-hydroxybutyrate supplement” “ketone esters”, ketone monoester, ketone diester, ketone triester, etc., and even medium chain triglyceride (“MCT”) is often classified as a ketone supplement in research.

Ketone bodies (ie. ketones) are small, water-soluble (ie. polar) molecules. BHB, together with acetoacetate (AcAc) and acetone is one of the three endogenous (fat-derived) ketone bodies produced primarily in the liver. Accounting for approximately 80% of ketones in the bloodstream, it acts as an energy source for tissues (especially the brain) in times of energetic deficits such as fasting, strenuous exercise or carbohydrate deprivation.

Where does it come from?

Simply put, endogenous ketones come from increased fat metabolism, which could be from dietary fat and/or stored bodyfat, while exogenous ketones can be administered through oral supplementation. In mammals, BHB production mainly happens in liver mitochondria in a cascade of steps necessary for the breakdown of fatty acids, a process called beta-oxidation. Synthesis of ketones (ketogenesis) is dependent on tight regulatory processes involving both hormones, such as insulin and glucagon, and nutrient-sensitive pathways (for instance, mTOR and AMPK). Some diseases cause impaired ketone production during hypoglycemia (ie. when fasting), which can be fatal, but can be successfully treated with ketone supplements (D/L-BHB salts). 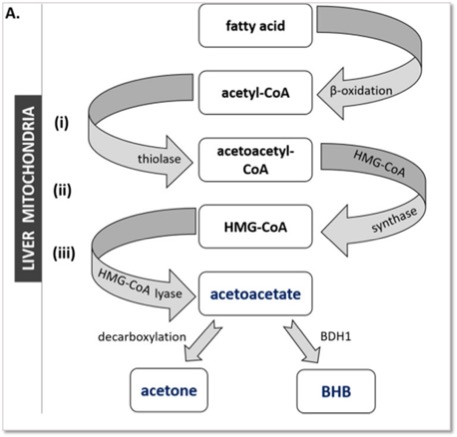 Once produced in the liver, ketone bodies enter the bloodstream and are distributed to metabolically active tissues; muscle, heart, and brain being the main ones. BHB is transported into tissues through proteins named monocarboxylic acid transporters (MCT, not to be confused with medium chain triglycerides also abbreviated as MCT). The presence of MCT types 1 and 2 in the blood brain barrier facilitates the transport of BHB from the blood into the brain [2]. To a smaller degree, BHB can also be locally synthesized in the brain by astrocytes [3]. After they enter the cell, metabolism of BHB occurs to generate energy in the form of ATP or to provide metabolic precursors for the synthesis of other molecules.

Two Forms of BHB: What is D and L form?

You may have heard of D- or L-BHB (aka, R- and S-BHB, respectively) and that is because there are two forms of BHB. These forms, or enantiomers, are ‘mirror images’ of each other, a phenomenon known as ‘chirality’. Other examples of chirality include our hands and shoes; despite being mirror images of each other, they cannot be superimposed.

D-(or R-) BHB is the form produced by our metabolism that is further broken down for energy production, in the form of ATP. L- (or S-) BHB is a transient molecule and an intermediate step in the synthesis of D-BHB from fatty acids.

When a racemic (containing both D/R and L/S enantiomers) BHB formula is consumed, D-BHB is quickly metabolized to produce energy whereas L-BHB is slowly metabolized and can serve a greater role as a signaling molecule. Additional benefits of racemic mix may include greater glucose lowering effects, potentially enhancing the anti-cancer effects, anti-seizure effects, and dampening of inflammatory signaling [4].

What does it do?

BHB’s most important role is boosting brain energy, especially in the context of reduced glucose availability or impaired glucose me tabolism.  Once BHB reaches metabolically active tissues, it enters the mitochondria where it 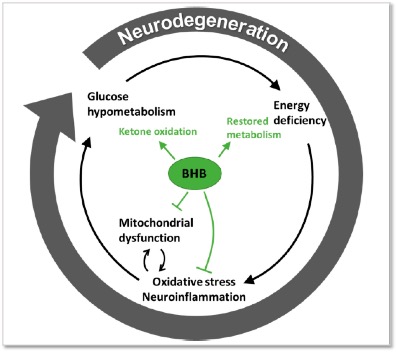 can be converted to acetyl-CoA and ultimately ATP (our cell’s energy currency). As a more energy-efficient fuel source than glucose (BHB has a higher H:C ratio than pyruvate), BHB can yield proportionally more ATP while producing fewer reactive oxygen species [5]. Moreover, BHB utilizes fewer NAD+ (coenzyme crucial to most metabolic reactions) per acetyl-CoA produced, and this NAD+ sparing effect can further enhance cellular processes. In the fasted state, BHB can provide up to 70% of brain’s energetic needs [6].

Impaired glucose utilization in the brain is a consequence of many neurodegenerative diseases and linked to impaired cognitive function with age. Researchers have coined the term type-3 diabetes when referring to Alzheimer’s disease, highlighting the glucose hypometabolism tightly correlated with impaired cognitive performance, among other neuropathological features. Exogenous ketone supplements or ketone precursors, such as medium-chain triglycerides (MCTs) are increasingly investigated as a promising therapeutic avenue to reverse or attenuate this brain energy gap, acting as an alternative brain fuel source [7].

More recently, research uncovered that BHB also acts as a potent signaling molecule. This can be observed both directly, by binding to cell surface receptors or via epigenetic modifications; and indirectly, by altering the levels of other regulatory metabolites (acetyl-CoA and NAD+, among others). [9]

BHB can bind to cell surface receptors named hydroxycarboxylic acid receptor 2 (HCAR2) and the free fatty acid receptor 3 (FFAR3). Activation of HCAR2 in many cell types results in anti-inflammatory and metabolic effects, contributing to improved glucose and lipid management. Moreover, BHB binding to FFAR3 receptors has been implicated in modulation of sympathetic tone and heart rate, playing a role in cardiovascular health.

How can we leverage BHB’s benefits?

Following a strict ketogenic diet, fasting, or practicing strenuous exercise are the most effective ways of endogenously raising levels of BHB. These approaches consistently lower glucose and insulin levels, which leads to mobilization of fat deposits resulting in increased hepatic ketogenesis.

Exogenous ketones can be administered orally through supplementation, such as the exogenous ketone salt supplement, Ketostart, containing high dose and both forms of BHB for increased efficiency.

In humans, the basal level of BHB tends to be low or nondetectable. It begins to rise after 12-16 hours of fasting, reaching 1-2mM after 2 days without food or following 60-90 minutes of strenuous exercise. This level can also be achieved when following a low-carbohydrate ketogenic diet. [15]

Since BHB is the predominant ketone in the bloodstream, measuring blood ketones (finger stick method that utilizes ketone strips) is the most efficient way to assess blood BHB levels.

One thing to keep in mind is that the commercially available technology to measure blood ketones occurs via an enzymatic reaction on the ketone strip that measures D-BHB only. Since your body also produces L-BHB, albeit in smaller quantities, or when you consume a racemic ketone supplement (containing both D and L forms, such as Ketostart), your total ketone values are likely higher than what is displayed by the meter. A complete analysis of total BHB including both forms would require more sophisticated technology currently only available for research and laboratorial analyzes. As the beneficial effects of ketosis can be experienced by most people at around 1mM concentration, much higher ketone levels are not always needed or advantageous.

Diabetic ketoacidosis is a life-threatening condition associated with a decline in blood pH, commonly observed when BHB levels extend beyond > 10mM together with elevated glucose levels in the context of absent or insufficient insulin levels. Ketoacidosis is theoretically possible with higher doses of ketone esters (observed in animal models), but unlikely with the dose-limiting effects of MCT or ketone salt formulations.

Important reminder: the magnitude of BHB elevation and “metabolic switching” in response to the approaches above is highly dependent on factors, such as age, sex, body composition, fitness and physical activity level, metabolic and genetic variability. So, work with your practitioner to better understand how to pull specific levers to improve your metabolic health.

Several animal and tissue studies investigated the direct effects of BHB working as energy substrate and antioxidant, including the neuroprotective, anti-inflammatory, anti-cancer effects, which physiological functions and mechanisms of actions was discussed in our previous blog and will be discussed in more detail in our later blog posts as well.

The growing understanding of the unique effects of BHB helps us explain and potentially expand the benefits of low carbohydrate ketogenic diets and exogenous ketone supplementation. While research on the molecular mechanisms and clinical applications of BHB continues evolving, there is substantial evidence to support the use of ketone bodies, in particular BHB, as a metabolic-based therapeutic tool. BHB is a potent and promising molecule that can not only alleviate the burden of metabolic disease, but potentially provide significant protection against conditions associated with brain energy deficit, including seizure disorders, neurodegeneration, and traumatic injuries to the nervous system by its direct energy-enhancing effects and via signaling through inflammation-suppression and gene expression. If proven effective, ketone supplementation with BHB could be used in conjunction with ketogenic diet therapy to more rapidly induce a higher level of ketones, especially in settings where acute therapeutic ketosis is favorable (eg. TBI, seizures, etc.), or in situations where people are unwilling or unable to sustain dietary ketosis.

Check out our previous blog articles for related content on the benefits of ketone bodies, ketogenic diets and exogenous ketones!