Can Keto Affect Your Genes?

Where ketones come into the mix

Elevated levels of beta-hydroxybutyrate (BHB), the primary ketone molecule, can alter the expression of different genes by functioning as an endogenous metabolite that can inhibit histone deacetylase enzymes (HDACs) [1]. HDACs inhibit gene expression by removing acetyl groups from our chromatin, thereby preventing cellular machinery from transcribing our genes. Inhibiting an inhibitor of DNA expression opens up the chromatin to allow for the expression of certain genes that would otherwise be silenced. In disease, this normal process of histone acetylation and deacetylation becomes altered. Genes that should be acetylated, and therefore activated, become silenced and vice versa. Pharmaceutical companies put a lot of research into developing drugs that mimic the effect of BHB, in particular the anti-cancer and anti-inflammatory effects. BHB is an endogenous metabolite that our bodies naturally make through fasting, the ketogenic diet, and more recently through exogenous ketone supplementation (i.e. MCT oil/powder and BHB-salts/esters). These molecules that pharmaceutical companies are creating have many side effects, whereas BHB has little to no known side effects. 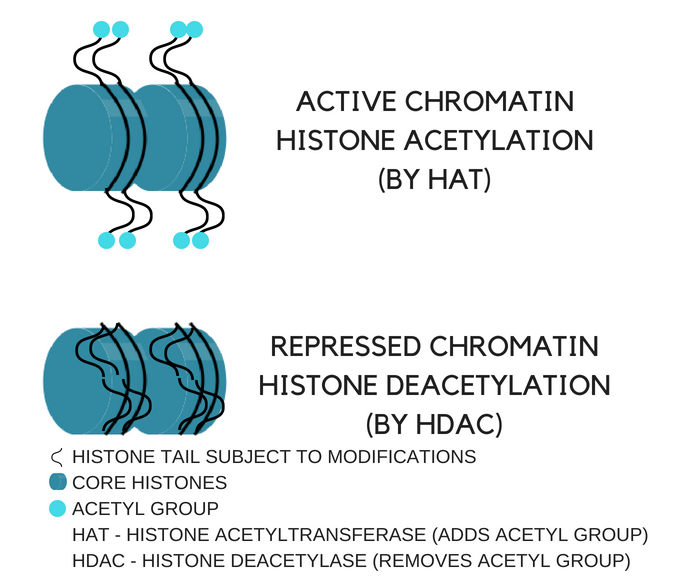 Figure 1. How histone acetylation and deacetylation can cause either gene expression or repression

Examples of ketones working as epigenetic regulators of gene expression

THE KETOGENIC DIET and CANCER

in cancer, it is very consistent to have abnormal patterns of acetylation and deacetylation. This means that certain genes that should be expressed and active are actually silenced, genes that protect us against cancer (e.g. tumor suppressor genes). When DNA is mutated or damaged, our cells activate processes that repair or reverse this damage. For example, one of the major tumor suppressor proteins, p53 – aka “Guardian of the Genome”, tells a cell that may be abnormally dividing rapidly to stop dividing. In many cancers, p53 is abnormally deacetylated meaning it cannot be expressed.  HDAC inhibitors are being developed specifically to open areas of the DNA that are abnormally silenced in cancer.  BHB has the same effect as this class of anti-cancer drugs.  The ketogenic diet as a potential anti-cancer therapy in animal models suggests that it can alter the way genes are expressed. The research done by Dr. Adrienne Scheck has shown that if you put mice with brain cancer on a ketogenic diet, the gene expression of the tumor changes in a way resembling closer to healthy tissue [2]. This could possibly be explained by BHB’s HDAC inhibition and effect on gene expression.

A 2013 paper published in Science, showed that BHB is a class 1 and class 2A HDAC inhibitor, in human embryonic kidney cells (HEK923), that enhances endogenous anti-oxidant capacity [3] – boosting our own cellular and physiological protection against oxidative stress. Damage to our DNA can be linked to oxidative stress in our bodies, and to know that we have an endogenous metabolite that epigenetically enhances the expression of these protective mechanisms is profound. BHB was found to induce acetylation, and therefore expression, of oxidative stress resistance genes through HDAC inhibition, specifically within the FOX03A pathway. The FOX03A pathway is another gene target that is of interest to pharmaceutical companies.

THE KETOGENIC DIET and LONGEVITY

Another paper published in Cell Metabolism used a ketogenic diet in mice and looked at a number of markers associated with health, longevity, and even tumor suppression. The results showed an extension in median life span by 13.6% in the ketogenic diet group compared to the control, even without calorie restriction [4]. The effects were mediated through epigenetic regulation of a number of genes including p53 and DDIT4, both in which are negative regulators of mTORC1, a potential driver of aging and age-related diseases.

THE KETOGENIC DIET and KABUKI SYNDROME

Kabuki syndrome is a rare disease that results from genetic aberration. There are genes that control the balance of gene expression and this balance is tightly regulated by two genes that are defective in Kabuki Syndrome. At this time, there is no treatment for this disease. Research has been done on an HDAC inhibitor, AR-42, which influences gene expression in a way that can silence the symptoms of the disease and reverse some of the neurodegeneration in the hippocampus. More recently, it was shown that the ketogenic diet used in the Kabuki mouse model with the use of exogenous ketones could circumvent the gene defect and produced hyper-acetylation of a region in the genome that could allow for the expression of genes that are silenced in the diseased state [5,6]. The proteins encoded by these genes were neuroprotective, silenced the disease effects, and rescued the neurons in the hippocampus.

Angelman syndrome is a disease caused by a persistent genetic defect where the symptoms are silenced with metabolic based therapy such as nutritional ketosis. Animal models responded remarkably well to exogenous ketones formulated into their diet – the treatment suppressed seizures, improved learning and memory, and improved motor function [7]. It did this through changing the neuropharmacology of the brain, by increasing the expression of the enzyme that converts glutamate to GABA, thereby increasing the GABA to glutamate ratio. The treatment essentially rescued the disease phenotype with profound neuroprotective effects. This is similar to Kabuki Syndrome where the genetic defect is causing a loss of neurons in the brain that control learning and memory. Ketones can be epigenetic regulators with the ability to work in a drug like fashion.

·      Animal models are very informative, but not always predictive. Mice have fast metabolisms, so metabolic based therapies such as the ketogenic diet may have different effects in a mouse model than a human model. A mouse’s metabolic rate is 5-7x higher than humans, that would mean a mouse that fasts for 24-hours will lose 20% of its body weight, equivalent to Dom losing 40 lbs in 24-hours. While these metabolic interventions (e.g. carbohydrate restriction or intermittent fasting) have profound effects in animal models, we can’t assume these will be the effects in humans. However, the metabolic biomarkers, gene regulation, longevity, and tumor suppression are all heading in the right direction.

·      Studies involving high-fat diets does NOT always mean ketogenic.  A lot of the research on a high-fat diet are not ketogenic due to their high sugar content. The carbohydrates may be restricted to some extent but not to the level that would induce nutritional ketosis defined elegantly by the elevation of blood BHB. Studies using a high-fat diet that show negative effects need to make the distinction between a high-fat ketogenic diet and a high-fat non-ketogenic diet. There is a very big difference.