Should you exercise on an empty stomach? Part 1 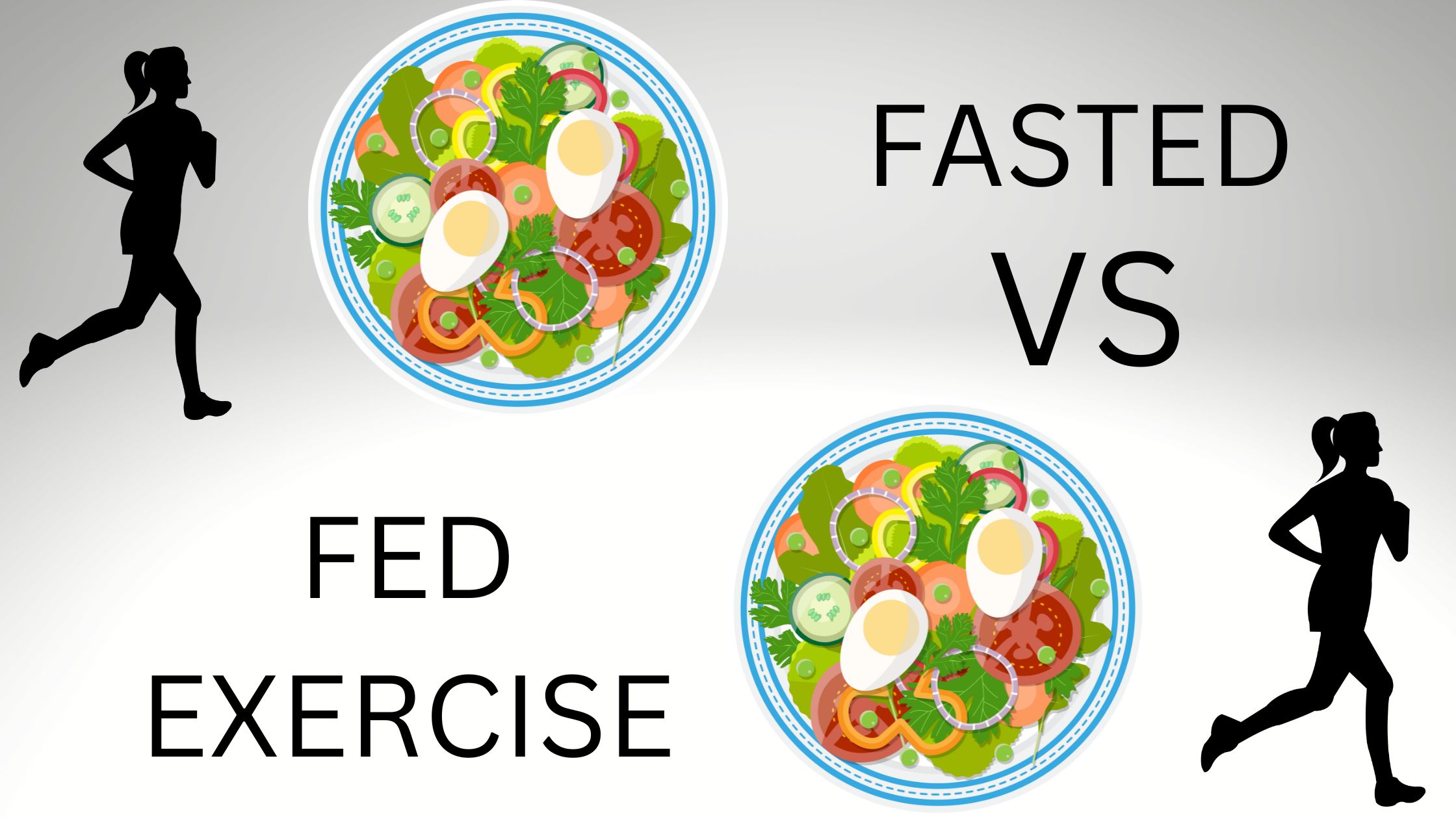 If you spend any time on social media, you’ve likely come across recommendations to work out fasted to burn more fat. On the other hand, there’s people who might make you feel like you absolutely need to eat before you hit the gym, otherwise you’re going to lose all your muscle and feel dead. Not only will the remainder of this article perhaps demystify these statements, but will allow you to see that our interest in fasted exercise comes from the perspective of metabolic health.

It’s true. Fasted exercise does increase the amount of fat we burn during exercise, compared to after a meal*. As you can see in the figure below, the contribution of fat to energy provision is significantly greater in the fasted state. It’s really just a response to availability. If you provide exogenous sources of carbohydrates before exercise, you’ll burn carbohydrates and mobilize less endogenous glucose and fats. This is likely in response to low insulin levels, since insulin blunts fat oxidation, and carbohydrates increase insulin levels. In our muscles, we store energy in the form of glycogen (glucose) and intramuscular triglycerides (IMTGs; fat). Maybe not surprising is that the greater fat oxidation in the fasted state results in greater degradation in IMTGs during continuous moderate intensity exercise. In fact, carbohydrate ingestion prior to exercise blunts the breakdown of IMTGs. Interestingly, eating carbohydrates before training causes you to burn more glycogen, and this study found that exercising in the fasted state (vs glucose-fed) facilitated greater muscle glycogen resynthesis post-exercise, which is a major defect in those with insulin-resistance. It is possible that this effect, if present in already insulin resistant states, could improve glycemia by improving glucose storage. Altogether, pre-exercise carbohydrates can both blunt the release of stored fats from adipose tissue (thereby reducing delivery of fats to muscles) and also inhibit fat oxidation in the muscles. However, Schoenfeld et al. showed that when calories are equated, fasted exercise doesn’t result in any superior body fat loss over fed exercise in young women. So, without going any deeper into fat loss, we can move on with the understanding that fasted exercise is no magic fat loss pill.

*Assuming that meal contains carbohydrates as this is what most studies are compared to. 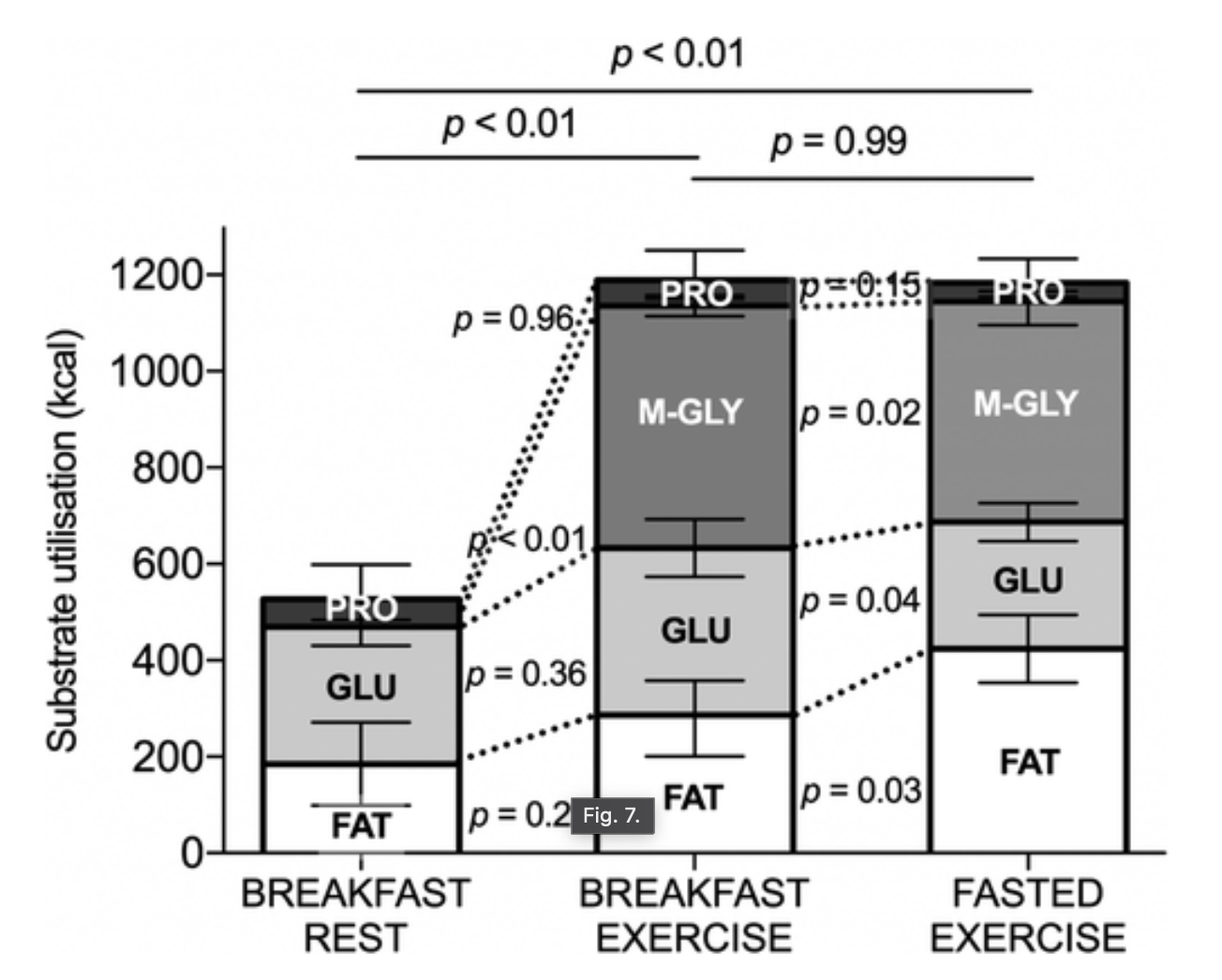 But, how does skipping breakfast and then exercising affect energy intake?

Beyond body weight, the metabolic effects of fasted exercise are a little more interesting

Blood sugar levels don’t seem to change much during fasted exercise. If you consume carbohydrates before exercise, your baseline glucose levels will be higher and they tend to fall during moderate intensity exercise. If you start exercise with already low (fasted) glucose levels, you may see a slight rise in blood sugar (from the breakdown of liver glycogen).

After exercise, in an acute setting, glucose levels do appear to be higher when a meal is consumed after fasted exercise vs it consumed after exercise in the fed state. In one study, consuming breakfast before exercise actually improves postprandial glucose disposal. However, this has been shown to be offset by the rate at which glucose appears in the blood, thus not affecting postprandial blood sugar levels. It’s important to consider that the levels of glucose we measure in our blood is the net between glucose entry into the blood and out of the blood (appearance vs disposal). In the study above where glucose disposal was greater in the breakfast followed by exercise group (compared to fasted exercise), this was offset by greater rate of appearance, and thus, there was no different in blood sugar levels in response to the OGTT. The authors hypothesize that this may have something to do with the absorption of glucose at the level of the gut rather than mediated through change in our muscles.

Glucose has two routes of entry into our muscles, one with the help of insulin, and the other induced by muscle contraction (i.e., exercise). When we consume carbohydrates before exercise, we are increasing insulin concentrations (route 1). Then we exercise and we are activating insulin-independent glucose uptake pathways (route 2). This could explain why eating before exercise can result in improved postprandial glucose disposal. However, this doesn’t take into consideration what happens to glucose levels longer-term.

There really aren’t too many training studies to draw conclusions from, but there are enough to make mention of. In overweight women, 6-weeks of fasted or fed HIIT (3x per week) led to similar improvements in body composition and oxidative capacity, but no effect on insulin sensitivity. In men, a couple really cool studies exist. One where men were randomized into three groups: non-exercise control, exercise after breakfast, and exercise after overnight fast. All three groups were prescribed hypercaloric diets (caloric surplus) for 6-week. The results showed that only the fasted exercise group showed improvements in insulin sensitivity and other markers of training adaptations. This is highly relevant to our obesogenic environment and suggests a protective effect of fasted exercise in the face of caloric excess. Another study showed that 6-weeks of fasted exercise improved insulin sensitivity compared to fed exercise, and this correlated with how much fat these individuals were burning during exercise. This suggests that the increased fat oxidation during fasted exercise may be delivering these improvements in metabolic health and may be why there were no benefits in the HIIT training study mentioned above as high-intensity exercise is largely glucose-dependent (glycolytic). These results fit with the research showing that the ability to burn fat during exercise is associated with improvements in insulin sensitivity and glucose metabolism.

How does pre-exercise feeding influence adaptations to training?

One of the molecular responses to exercise training that many sport scientists are interested in is AMP-activated protein kinase, more better known as AMPK. As its name suggests, AMPK is activated in response to elevated AMP levels, which increase during exercise in an intensity- and duration-dependent manner. Tha activation of AMPK increases the signaling pathways responsible for increasing mitochondrial content and function, as well as recruiting glucose transporters for increasing glucose uptake into muscles (from the blood). In this way, the activation of AMPK in muscles may lead to improved metabolic flexibility over time, a feature of metabolism closely linked to metabolic health. Carbohydrate ingestion prior to exercise reduces fat oxidation and increases carbohydrate oxidation during exercise, which makes logical sense. However, this increase in carbohydrate availability supplied exogenously means we don’t have to breakdown our glycogen or fat stores to the same degree had we been in the fasted state. AMPK is thought to function as a fuel sensor in skeletal muscle (increasing in activity in response to low energy states and triggering adaptations that restore energy availability), and carbohydrate ingestion prior to exercise has been shown to blunt AMPK activity compared to exercising in the fasted state, though this isn’t always shown. In addition, one of the downstream signaling pathways of AMPK is the activation of PGC1-alpha, the proposed “master regulator of mitochondrial biogenesis”, has been shown to increase with exercise independent of whether participants were in the fasted or fed state. Muscle contraction, per se, likely regulates many of the adaptive responses to exercise regardless of how our metabolism is responding. With that said, 6-weeks of fasted exercise training resulted in greater adaptations to fasted exercise training that support fat oxidation and transport. The majority of research suggests that carbohydrate consumption prior to exercise does attenuate the expression of genes responsible for fat oxidation and transport (often also related to mitochondrial function, too). Fasted exercise favors fat oxidation (i.e., causes us to rely more on fat for fuel during exercise) which may be responsible for modifying the expression of genes post-exercise. These effects are thought to be due to greater availability of free fatty acids in the fasted state. Interestingly, this may not happen in the converse scenario whereby exercising in the carbohydrate-fed and elevated insulin state causes a greater upregulation in genes that improve carbohydrate metabolism. These pathways (insulin-signaling and glucose transport pathways) do not seem to be affected by whether you exercise in the fed or fasted state. In contrast, glucose transporters (GLUT4) have been shown to be higher after exercise in the fasted compared to fed state. There is still a lot more to learn about endurance adaptations to fasted exercise. 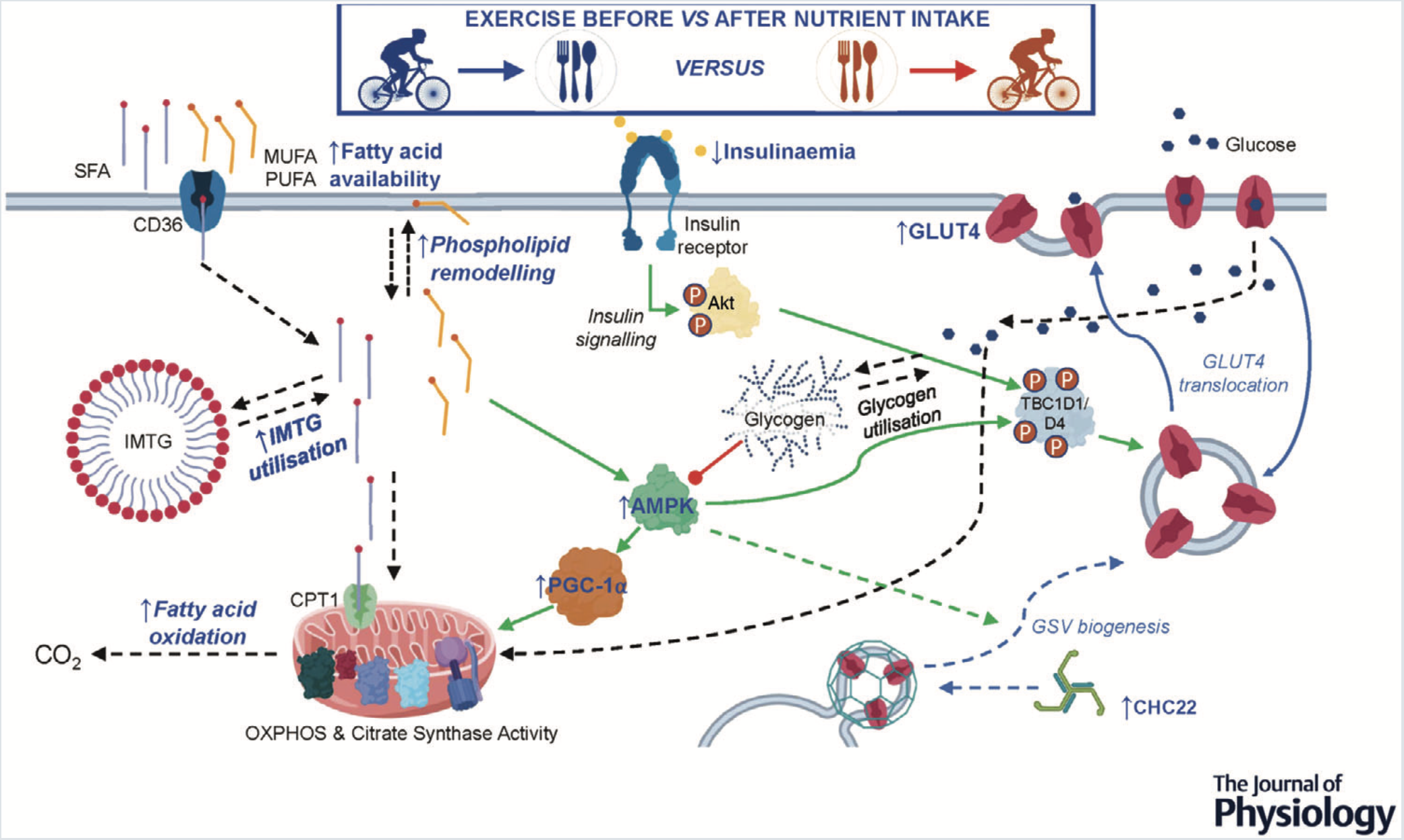 What you do the night before your fasted exercise matters. For example, in one study glycogen was depleted the night before with a high-intensity workout, and participants either ate afterwards or remained in the fasted state before going to bed. After their overnight fast, they all cycled for 2 hours at moderate intensity in the fasted state. Before the 2 hour cycling bout, the group that didn’t refeed after the HIT the night before, had higher AMPK levels and activity then the group that restored muscle glycogen the night prior. The low glycogen group also had higher rates of fat oxidation during the fasted exercise, and showed greater elevations in genes responsible for fat metabolism and transport. Compared to commencing exercising with high glycogen, low glycogen did not increased markers of mitochondrial biogenesis.

As far as we are aware, there is very little research that has been done looking at fasted vs fed weight lifting. One study we found showed that resistance training in the fasted state may actually enhance the anabolic (muscle growth) response to post-exercise protein and carbohydrates.

In part 2, we will cover fasted exercise while following a low carb diet, how it may impact performance, and considerations for women.