Though ketogenic diet treatment may have a role in a number of substance use disorders (SUDs), so far most studies have addressed the role of keto diets with respect to alcohol abuse. Alcohol Use Disorder (AUD), also known as alcoholism or alcohol dependence, is characterized by strong cravings, lack of control when drinking, and feelings of anxiety or irritability when not drinking (1). A 2017 study found that, of over 36,000 US adults sampled, 29.1% had experienced AUD in their lifetime, and 13.9% had an AUD lasting over 1 year (1). AUD is associated with disabling symptoms as well as personality disorders, and accounts for 5% of deaths globally (1). The ill-effects related to alcohol withdrawal are thought to play a major role in perpetuating AUD, and thus there is a need to develop therapies to mediate withdrawal symptoms (1). This blog post will explore how the ketogenic diet may be able to mitigate withdrawal associated with AUD as well as other aspects of this highly prevalent disease

It has been shown that metabolic changes occur during acute alcohol use as well as in AUD (2). Acute alcohol use results in a corresponding acute decrease in glucose consumption by the brain, in favor of acetate (a breakdown product of alcohol) (2). This acute effect becomes chronic in patients with an AUD, who show overall greater brain usage of acetate and lower usage of glucose, when compared to patients that do not drink (2). This shifted brain metabolism is again disturbed when patients with an AUD cease to drink, as acetate levels drop and glucose again begins to rise (2). A recent paper hypothesized that this shift in metabolism may be may be partly responsible for alcohol withdrawal symptoms, as well as its associated neurotoxicity (3). 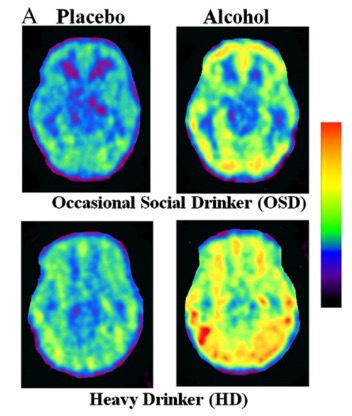 Assuming that the shift from brain acetate to glucose was partly responsible for alcohol withdrawal, researchers sought a ketogenic diet as treatment (3). Because the diet is high in fat, low in carbohydrates, and low in protein, the associated suppression in insulin signaling increases the use of fat for fuel (3). Enhanced fat metabolism generates an abundance of ketone bodies, including BHB (B-hydroxybutyrate), acetoacetate, and acetate, which the body then metabolizes in in a greater percentage relative to glucose (3). Thus a ketogenic diet alters the body’s metabolism in a way that is in greater alignment with the increase in acetate seen in AUD (3).

To investigate ketogenic diet as a treatment for alcohol withdrawal, researchers randomized 33 patients with an AUD to either a ketogenic diet (KD) group or control group (standard American diet), and analyzed a number of markers over three weeks as the patients halted alcohol use and entered withdrawal (3).

They found the following key results:

All of these results are suggestive of a beneficial effect by ketogenic diet treatment in mitigating alcohol withdrawal. Benzodiazepines are drugs commonly used to reduce withdrawal symptoms, so the reduction in their use in the KD group is indicative of lower withdrawal symptoms (3). Alcohol Cue Reactivity is a measure of brain activation, as measured by fMRI, which is associated with alcohol craving (3). The decrease in alcohol cue reactivity in the KD group is thus indicative of less alcohol craving (3). Finally, neuroinflammation markers decreased, as indicated by 1H-MRS levels of mI (myo-inositol) and choline (3). This final finding is interesting in that it suggests that keto diet may partly be acting to decrease alcohol withdrawal symptoms via a reduction in neuroinflammation (3). This finding is consistent with previous research, demonstrating that BHB was able to lower inflammation through inhibition of the NLPR3 inflammasome (4).

In addition to the above study, other non-human studies have also shown promising results for keto diet as a treatment for AUD withdrawal (6). Using a rat model of AUD, Denker et al showed that ketogenic diet treatment demonstrated a significant decrease in rigidity and irritability – both markers of withdrawal symptoms in rats (6). They likewise attributed this decrease to the change in brain metabolism (and adaptations) elicited by ketogenic diet resembling that seen in AUD (6).

Work by Blanco-Gandia et al investigated changes in neurotransmitter levels in a mouse model of EtOH self-administration with and without keto diet treatment (7). For context, it has been shown previously that neurotransmitter levels are significantly altered in both acute alcohol consumption and AUD (8). AUD is characterized by increases in brain glutamate (excitotoxic) and decreases in dopamine, GABA, serotonin, and CB1R (a cannabinoid receptor) (8). In the Blanco-Gandia study, it was found that mice that underwent keto diet treatment prior to engaging in their 7 day EtOH self-administration model showed greater expression of dopamine (D1, D2) and adenosine (A2) receptors (7). Overall, mice on the keto diet showed less EtOH self-administration (7). However, use of a progressive ratio EtOH administration program showed no difference between the keto diet and control groups, suggesting that keto diet did not modify motivation to consume EtOH in this study (7).

Besides being used as a treatment for AUD withdrawal, there is some promise for keto diet treatment in other aspects of AUD. Patients with AUD often experience mental health changes, including depression and decreased sociability (10). A Cell Reports paper looked into how BHB alterations in the microbiome may underlie these psychological aspects of AUD (10).

The study first established that the microbiome may play a causal role by transplanting the microbiomes of patients with AUD into mice (10). These mice were then shown to have the expected behavioral changes associated with AUD, namely depression-like behavior in the forced swim test and decreased sociability in the three-chamber sociability cage (10).

Along with these changes in behavior, the mice also exhibited microbiome dysbiosis (10). The AUD microbiome was found to contain more EtOH-producing bacteria, which inhibited production of BHB in the liver via EtOH-mediated blockage of the liver enzyme HMGCS2 (10). BHB has been shown to be neuroprotective, and the researchers hypothesized that the decrease in BHB, and thus decrease in neuroprotection, contributed to the behavioral changes (10).

To study this, the researchers compared control mice to those placed on a keto diet (10). The mice on the keto diet exhibited a significant increase in serum BHB as well as a concomitant increase in their sociability scores (10). They also showed increases in myelination and neurotransmitter levels (to more normal levels) as well as decreases in neuroinflammation, in line with the researcher’s hypothesis (10). Though the keto diet did not seem to rescue all of the behavioral alterations seen in AUD, this study represents an encouraging first step (10). 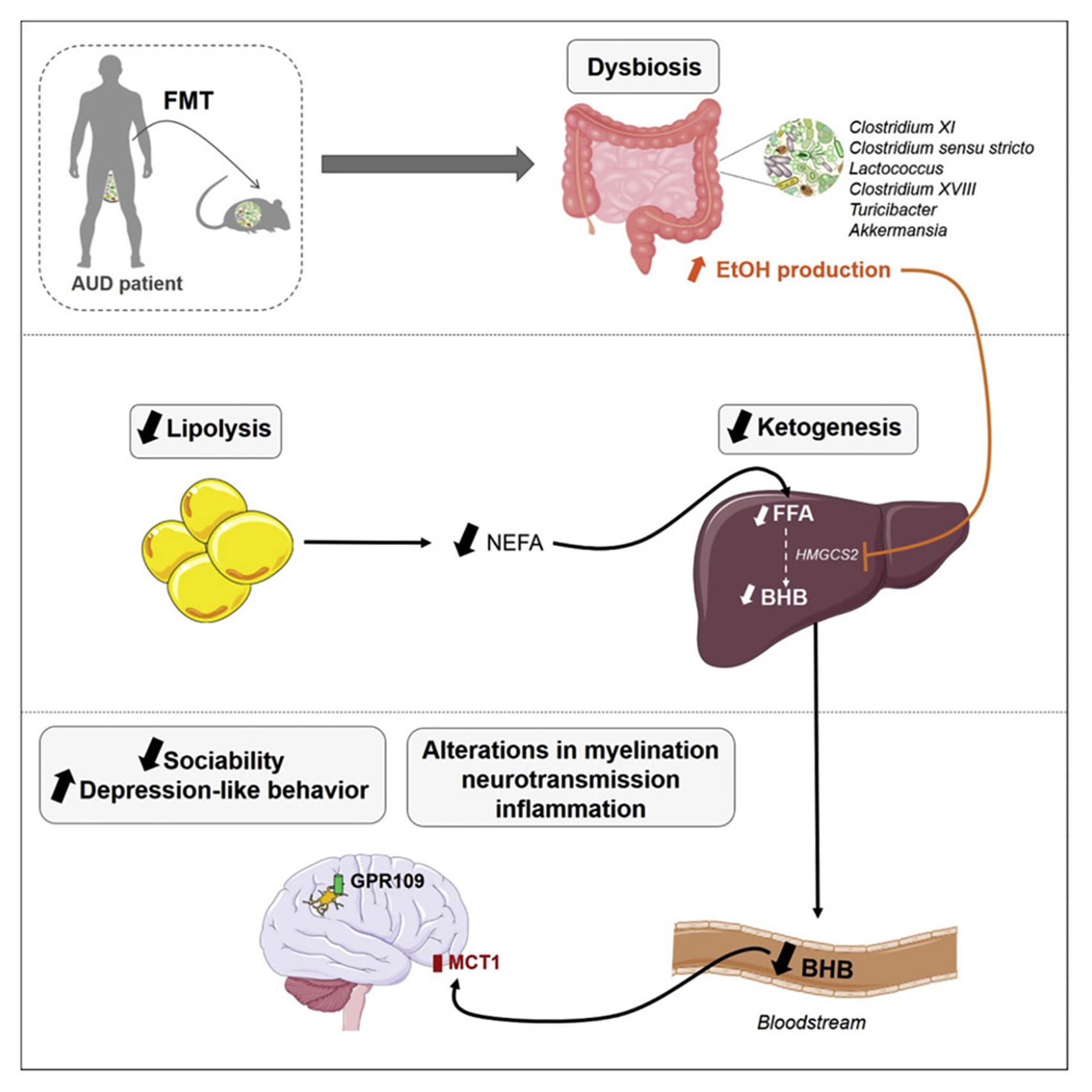 Chart showing the hypothesized pathway in AUD that leads to its characteristic behavior changes (10).

Outside of AUD, keto diet has not been studied in many other SUDs. However, one study on keto diet as a treatment for cocaine abuse was of interest. Research by Martinez et al showed that keto diet decreased addictive behavior in a mouse model of cocaine addiction (11). Specifically, mice on a keto diet showed fewer “rearing” responses (i.e. standing on rear limbs) – a well-described behavior related to cocaine addiction – both during cocaine administration and following a period of abstinence from cocaine (11). The researchers hypothesized that this result may be related to ketone-induced neurotransmitter changes in the dopamine signaling pathway (11). Dopamine signaling plays a critical role in addictive behaviors, and ketone-mediated changes in adenosine-dopamine heterodimers, according to the researchers, may be one way in which the addiction pathway is attenuated through ketosis (11).

Altogether, more research needs to be done to investigate the possible benefits of a keto diet treatment for AUD and other SUDs in humans, but the animal research looks promising thus far. The results of the human clinical trials mentioned above will go a long way in establishing keto diet as a reliable therapy for AUD withdrawal. Further studies will also be needed to investigate keto diet for other aspects of AUD, like as a treatment for the AUD-associated mental health changes. Other SUDs may also benefit from keto diet therapy, like cocaine abuse, but the research is still early in this area.