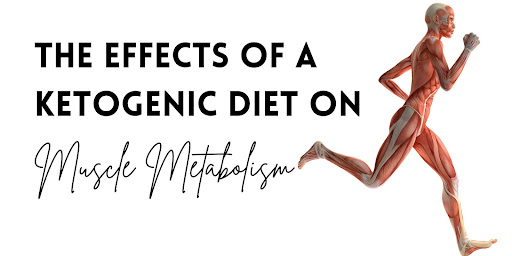 The ketogenic diet significantly alters metabolic physiology, and this underlies the therapeutic effects of the diet on seizure control, glycemic management and weight loss. There are a variety of metabolic and signaling mechanisms associated with ketosis that are reported in the scientific literature. However, the attention surrounding the effects of the ketogenic diet is now beginning to shift towards its impact on muscle metabolism. While the evidence is not as abundant as the ketogenic diet’s impact on weight loss, diabetes, and cognitive health, researchers are beginning to search the “dark corners” of ketone physiology to have a better understanding on how it impacts muscle metabolism in health and disease. A recently published review in Nutrients by a group at Moscow State University and Moscow State Medical University sifts through the current literature on the impact of the ketogenic diet in health and disease to help bring light to the current understanding of the ketogenic diet on muscle metabolism. In this article, we’ll go over their findings and provide a clear understanding on what the current research says, and research needs of the future.

Compared to most other tissues, muscle tissue is one of the most highly energy-demanding tissues in the body. Sufficient ATP is essential for optimal contraction and function. Changes to our diet, change energy metabolism, and therefore influence muscle tissue through ATP supply and production of metabolic intermediates. Luckily muscles have a high capacity for metabolic flexibility which allows them to utilize different substrates in order to generate ATP.

In the absence of a ketogenic diet, humans store an abundant amount of glycogen in the skeletal muscles and liver. When partaking in activities at an intensity above 70% an individuals VO2 max, glycogen is the main energy source for creating ATP. When glycogen stores become depleted during higher intensity exercise, glucose availability becomes limited and we experience a sudden onset of fatigue.

In lower intensity activities, glycogen is also often the primary source for energy however as duration of exercise increases production of energy is also provided by lipids and muscle protein amino acids. It should be noted that not all muscle tissues are the same, and their differences are identified by their energy metabolisms and their reliance on oxidative phosphorylation. Slow-twitch fibers have high mitochondrial content and high oxidative capacity that sustain long-term energy requirements. Fast-twitch fibers have lower mitochondrial content, decreased reliance on oxidative phosphorylation, and include fast-oxidative (type IIa) or fast-glycolytic (type IIb) subtypes.

Ketones bodies acetoacetate, beta-hydroxybutyrate, and acetone are 3 ketones produced in the liver after reduced carbohydrate availability then broken down for ATP production by the muscle. Therefore, the metabolism of ketones in the muscle (ketolysis) is dependent upon the initiation and sustainment of ketogenesis in the liver, and this process is augmented by exercise.

Figure 1. Ketogenesis in the liver and ketolysis in the muscle. Source: Yukapova et al. 2022. Free fatty acids (FFAs) are transported to the liver and converted to fatty acyl CoA (FA-CoA). The next step after beta oxidation is condensation of Ac-CoA molecules to acetoacetyl COA (AcAc-CoA) by mitochondrial thiolase activity of Ac-CoA acetyltransferase (ACAT). Then in a reaction with hydroxymethylglutaryl CoA synthase (HMGCS) generates hydroxymethylglutaryl-CoA (HMG-CoA). HMG-CoA decomposes to AcAc by HMG-CoA lyase (HMGCL). AcAc can be released to the circulation, but most of it is reduced to beta-hydroxybutrate by 3-betahydroxybutrate dehydrogenase (BDH). BHB can undergo interconversion with AcAc in the liver and in other tissues after its update from the blood. Succinyl-CoA:3-oxoacide CoA transferase (OXCT) catalyzes the generation of AcAc-CoA from AcAc and succinyl-CoA. Finally, AcAc-CoA is cleaved to Ac-CoA by ACAT and Ac-CoA is incorporated into the TCA cycle. The asterisk (*) indicated protein content and enzyme activity that are higher in the exercise-trained skeletal muscle.

Increases in circulating ketone body levels leads to a reduction of glucose utilization in peripheral tissues, a reduction of anti-lipolytic effects in adipose tissue, and a reduction of protein breakdown in muscle tissue. During exercise, ketone bodies are utilized by working muscle and the capacity to take up and oxidize ketone bodies for energy increases as a muscle becomes progressively more trained. One study found that the enzyme PGC1-alpha, (which stimulates mitochondrial biogenesis and promotes the remodeling of muscle tissue to a fiber-type composition that is metabolically more oxidative and less glycolytic in nature and participates in the regulation of both carb and lipid metabolism) was found as a transcriptional regulator of ketolytic enzymes and ketone body transporters in skeletal muscle. Modulation of ketolytic gene transcription in skeletal muscle by PGC1-alpha affects ketosis in response to exercise and the ketogenic diet.

Apart from acting as an energy source for muscle, ketone bodies also work as signaling molecules to regulate gene expression and adaptive responses. One study showed that BHB is an endogenous and specific inhibitor of histone deacetylases. Increases in FOXO3A and MT2 activity after treatment of mice with BHB provided protection against oxidative stress, reduced muscle wasting, prevented intramuscular fat accumulation, and elevated oxidative metabolism during aging. However, researchers in this study also demonstrated that BHB caused upregulation of muscle atrophy-related genes and the reduction in expression of anabolic genes, which could function in energy conservation and stress resilience in the context of an energy deficit. 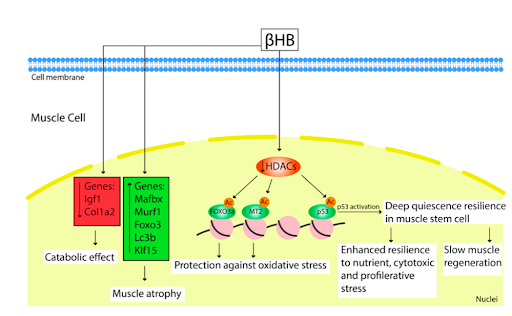 Therefore, the question that remains after these findings is whether or not the protective effect of BHB also causes muscle dystrophy. It is important to keep in mind that many of these studies analyze ketone bodies in the state of fasting and starvation. Therefore, the question of whether or not ketone bodies in the presence of a caloric surplus still have a strong effect on muscle atrophy genes remains open. 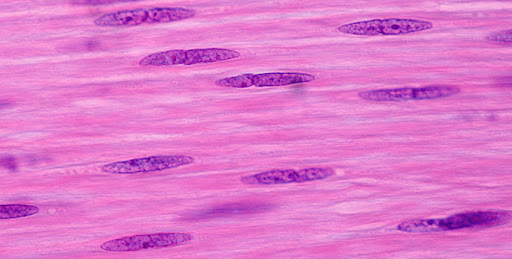 In the previous section, we established that the data does exist showing that the ketogenic diet is conducive in upregulating muscle atrophy related genes in the presence of starvation and fasting. However, there is also data to display instances in which the ketogenic diet does not change body mass and muscle mass. In a study by Wallace et al. (2021) showed the effectiveness of a long-term ketogenic diet in mitigating age-related muscle loss. Beneficial effects of the ketogenic diet were also associated with a shift in fiber type from type 2b to type 2a fibers, increased parkers of neuromuscular junction remodeling, mitochondrial biogenesis, oxidative metabolism, and antioxidant capacity while decreasing endoplasmic reticulum stress, protein synthesis, and proteasome activity.

Ultimately, it is shown that the ketogenic diet has different effects on skeletal muscle that are partially explained by muscle fiber type, while the ketogenic diet can lead to a change in the fiber type ratio in the muscle itself. While currently the data is contradictory on the ketogenic diet’s benefits and adverse effects on muscle tissue, there is still room for discovery to be made in how the ketogenic diet impacts muscle metabolism in states outside of prolonged fasting and starvation. Based upon what we know about the anti-catabolic effects of ketones, and their multifunctional role during starvation, the benefits of being in ketosis appear to have the greatest effect during metabolic stress associated with disease states and exercise-induced stress. In this context the ketone-induced effects are protective and may confer a longevity advantage when it comes to longevity and long term preservation of muscle structure and function.