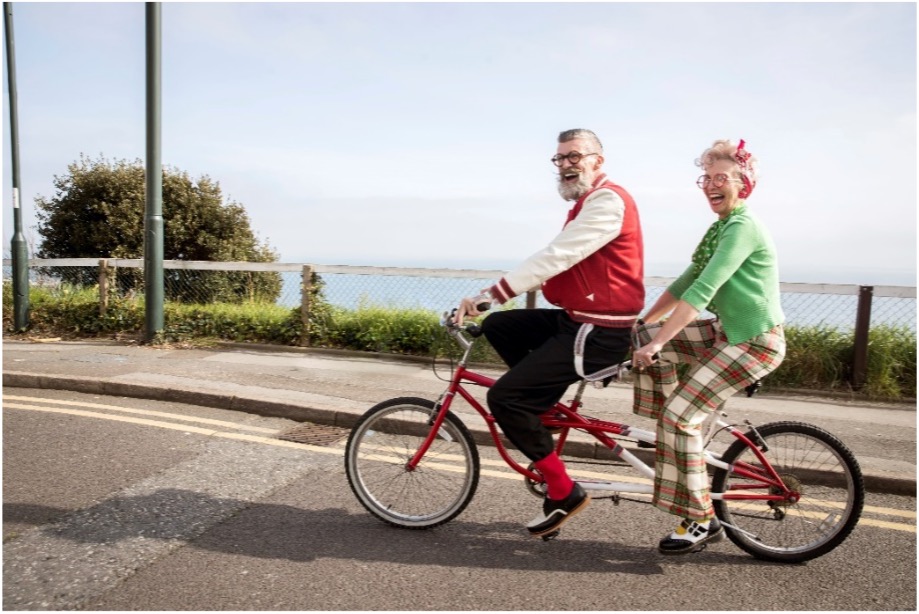 Our latest review article discussed the beneficial effects of ketones on aging and age related neurodegenerative diseases, summarizing the main hallmarks of aging processes and certain signaling pathways that may be connected to the beneficial influences of exogenous ketogenic supplements. In this blog post we highlight some of the main mechanisms how ketosis might help increase not only lifespan, but health span as well.

It is encouraging that humans are now living longer, largely due to medical advancements and improved sanitary conditions. However, incidence of chronic age-related diseases (cardiovascular disease, dementia, Parkinson’s Disease, diabetes and cancer, amongst others) continues to rise. So, the extra years we get to live are not always spent in health and with quality of life. This gap between lifespan (the maximum length of time one or more members of a population survives between birth and death) and healthspan (the part of a person’s life during which they are generally in good health) in the aging population highlights the need for managing and preventing chronic diseases in safe and effective ways.

A key finding in aging research was an early observation in 1939 that restriction of calories in animal models increased lifespan. Since then, this discovery has been replicated in several other species, including non-human primates. This finding paved the way for a novel research area investigating the intersection between longevity and metabolic associated pathways.

Initially used to treat drug-resistance epilepsy in children, Ketogenic Diets (KDs) have since been investigated in multiple other conditions, including neurodegenerative diseases (NDs) such as Alzheimer’s disease (AD), Parkinson’s disease (PD), Amyotrophic Lateral Sclerosis (ALS), etc. Rodent studies have reported that a ketogenic diet, likely through increased ketosis, reduced midlife mortality, extended longevity and healthspan in adult mice. In addition to decreased levels of ingested and circulating glucose, it is suggested that some benefits of KDs may be attributed to the mechanisms induced by KBs themselves. Since adherence to a strict KD may be challenging, exogenous ketone supplements (EKSs) become an interesting alternative or adjunct therapeutic option to elicit nutritional ketosis. Alternatively, some individuals following a KD may want to deepen their ketosis or enhance biochemical processes that may be associated with the role of beta-hydroxybutyrate (βHB) as a signaling molecule.

We have previously uncovered the differences between KD and exogenous ketones, but let’s briefly refresh this important concept: endogenous ketones result from a metabolic state achieved through dietary interventions (e.g., prolonged fasting, severe caloric restriction or consumption of ketogenic diets) when liver metabolism of fat generates ketone bodies (acetone, acetoacetate and beta-hydroxybutyrate). On the other hand, exogenous ketones result from the consumption of ketone supplements, that either directly elevate ketones (ketone salts), or provide ketogenic precursors (medium chain triglycerides or MCTs) or a combination of both (ketone esters).

One key focus of our research is how metabolic health can impact other facets of health, including longevity and healthy aging. Last month our Hungarian research team published a review in the journal Nutrients which describes the intricate molecular pathways associated with aging and age-related neurodegenerative diseases, and how exogenous ketone supplements (EKSs, βHB salts, ketone esters and MCTs) can affect the very same pathways. Let’s take a closer look at the aging hallmarks, how they impact longevity and their intersection with ketones. 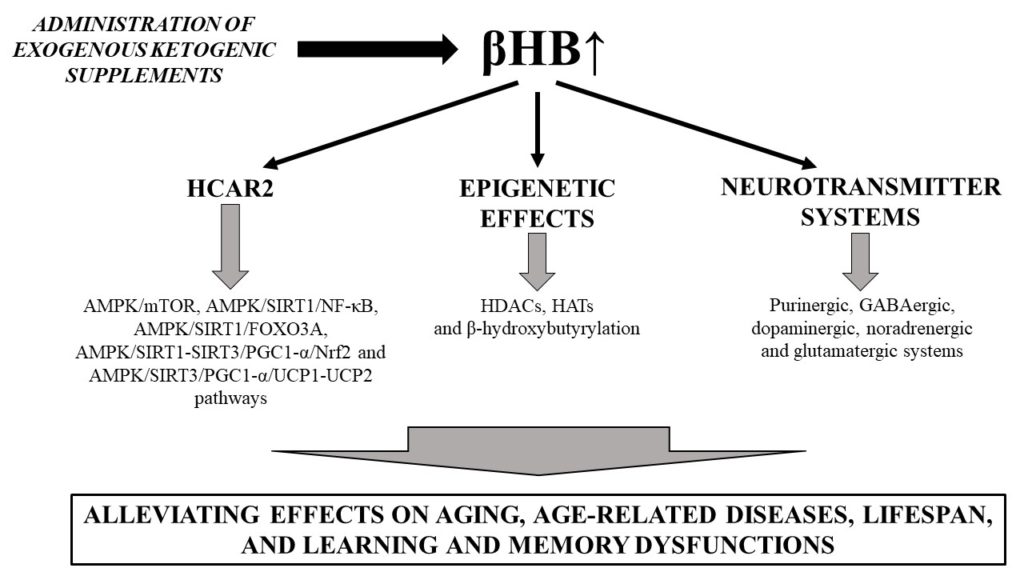 The ability to sense and respond to fluctuations in environmental nutrient levels is a crucial component of life. During food abundance, nutrient sensing pathways engage in anabolism (building, increasing molecular complexity) and storage while scarcity triggers catabolism (breakdown of complex molecules) and the mobilization of internal stores through mechanisms such as autophagy. Nutrient sensing pathways are commonly dysregulated in human metabolic and age-related diseases. Key pathways here include:

Telomeres are an important structure at the end of each of our chromosomes. Similar to the plastic tips at the ends of shoelaces, telomeres help chromosomes maintain their structural integrity. Each time a cell divides, the double-stranded DNA separates so genetic information can be copied. When this happens, the DNA coding is duplicated but not the telomere, resulting in shortening each round of cell division. This mechanism limits proliferation of human cells to a finite number of cell divisions by inducing replicative senescence, differentiation, or apoptosis. It has been suggested that telomere shortening may have a role in the development of age-related NDs.

When DNA is duplicated, there is always a chance of errors. Even though our cells have developed tight DNA repair mechanisms, defects still may occur resulting in genome instability, accumulating genetic damage and cell dysfunction and aging via senescence, triggering the onset of NDs. βHB can likely play a role here via modulation of SIRT1 and AMPK pathways, shown to attenuate age-related telomere shortening through PGC-1a, suggesting beneficial role of AMPK/SIRT activation.

Epigenetics refers to DNA modifications that can change gene expression by means of specific molecular switches, leading to genetic activation of inhibition. Epigenetic alterations may happen via DNA methylation (silencing that specific gene), chromatin remodeling, expression of non-coding RNAs and posttranslational histone (a protein that provides structural support to our DNA by acting as spools around which DNA winds to) modifications.

Histone acetylation/deacetylation, shown in the figure below, can modulate lifespan, aging and age-related diseases. βHB can inhibit histone deacetylase (HDAC) activity, leading to expression of genes that would otherwise be repressed. In addition, increased βHB levels has been shown to evoke epigenetic alterations by β-hydroxybutyrylation of histones, resulting in regulation of gene expression and adaptation of cells to altered energy source. 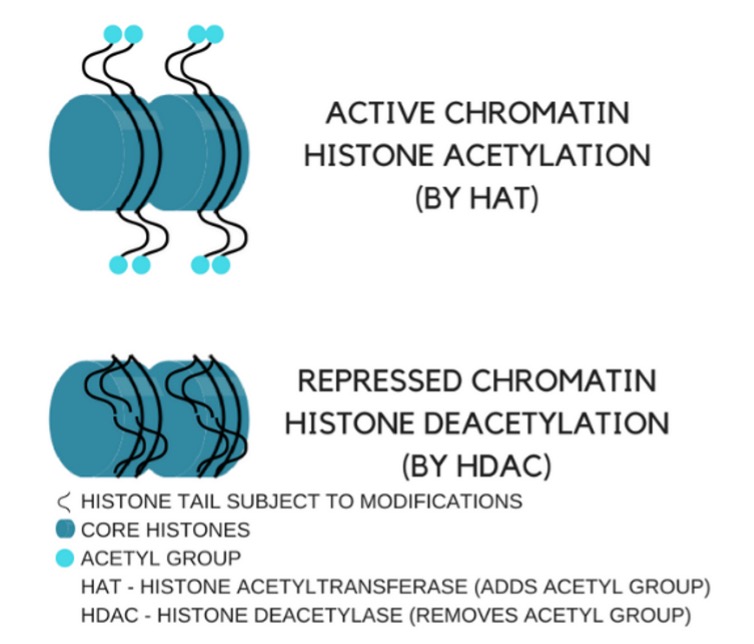 Source: Can keto affect your genes?

Autophagy and mitophagy both suppress NLRP3 stimulation, generating an anti-inflammatory effect, mitigating the NLRP3-evoked cleavage of pro-IL-1β to its active form IL-1 β, leading to delayed aging processes. As mTORC1 inhibits autophagy, all drugs or interventions that can inhibit mTORC1 (e.g., caloric restriction) may delay aging processes and enhance lifespan via inhibition of inflammation. Indeed, inhibition of NF-kB signaling (by both genetic and pharmacological methods) has been shown to prevent age-associated features in mouse models of accelerated aging extending their longevity.

Senescence, the process of deterioration with age, manifests on a cellular level by the loss of a cell’s capacity for division and growth. Senescent cells eventually stop multiplying but don’t die off when they should. Instead, they remain and continue to release chemicals that trigger inflammation, exhibiting a specific senescence-associated secretory phenotype. Cellular senescence is not always a detrimental process. For example, it can reduce liver fibrosis or even prevent cancer development but when senescence is exacerbated and results in accumulated senescent cells, this accelerated the aging process and consequent development of age-related diseases (e.g., AD and cancer).

Loss of proteostasis (impaired protein homeostasis) also occurs as part of the aging process. Activity of ubiquitin-proteasome system (a highly regulated mechanism of intracellular protein degradation and turnover, via tagging proteins for degradation by linking them to the polypeptide co-factor, ubiquitin) and autophagy decreased with age, whereas increased activity of proteostasis network (e.g., enhanced autophagy) extended healthspan and lifespan in a C. elegans model (a nematode worm that presents a relatively simple organism commonly used in preclinical research to investigate longevity).

Age-dependent decrease in number and function of stem cells result in aging and age-related diseases through loss of regenerative ability of cells, tissues, and organs. Stem cell aging may be evoked by several factors, such as DNA damage and mutation, cellular senescence, defects in proteostasis, mitochondrial dysfunction and telomere attrition.

Senotherapy is an early-stage research field for development of therapeutic agents and strategies targeting cellular senescence. Senolytics are drugs or interventions that clear out senescent cells. One example is a cocktail containing quercetin (a flavonoid found in green tea, coffee, onions, berries, apples, broccoli) and dasatinib (a drug commonly used in leukemia chemotherapy). Senomorphics are small molecules that can modulate function and morphology of senescent cells, suppressing senescence-associated secretory phenotype. Examples of senomorphics agents are metformin (an antidiabetic drug that reduces IGF levels, insulin resistance and insulin level) and rapamycin (an mTOR inhibitor).

Resveratrol (an organic compound produced by plants and found in the skin of grapes, blueberries, raspberries), curcumin, berberine and quercetin have also been associated with positive effects on lifespan, age and age-related diseases, for example, through AMPK activation and mTOR inhibition (resulting in increased autophagy), activation of SIRT1 (promoting mitochondrial biogenesis) and anti-inflammatory effects.

These agents may decrease the risk of development of age-related diseases, attenuating age-related decrease in memory and learning. Rapamycin decreased accumulation of amyloid beta (Aβ) and tau (hallmarks of AD pathology in the brain) and alleviated cognitive dysfunction in mouse models of AD. Administration of senotherapeutic drugs suggest that interventions that can modify the aging process, can also delay development or attenuate symptoms of NDs, improve memory and learning, as well as extend longevity.

Alleviating effects of ketosis on lifespan, aging and age-related NDs

While EKSs are a fairly recent addition to a practitioner’s arsenal, emerging findings suggest that they are effective in eliciting many of the same benefits of diet-induced nutritional ketosis (for an in-depth review of the benefits and applications of EKS, go to this post), such as:

We also know that caloric restriction and fasting have consistently shown health benefits such as attenuated aging, increased longevity and overall neuroprotective effects. Both CR and fasting reportedly induce ketosis and contribute to higher rates of fat oxidation, in addition to modulating nutrient sensing and autophagy pathways as well as DNA methylation.

On the other hand, not only ketosis but also decreased glucose levels can mitigate inflammatory processes. While βHB has been shown to act as an endogenous inhibitor of the NLRP3 inflammasome, glucose reportedly enhanced activity of the NLRP3 inflammasome resulting in exacerbated inflammatory processes. In addition, increased glucose levels trigger insulin release, inhibiting ketogenesis in the liver. On the other hand, EKSs have shown to decrease glucose levels, suggesting that they may increase the activity of the AMPK/SIRT signaling pathways and inhibit mTOR-induced effects.

In summary, increased ketosis (βHB levels) has been shown to modulate the following pathways, highlighted in the figure below: 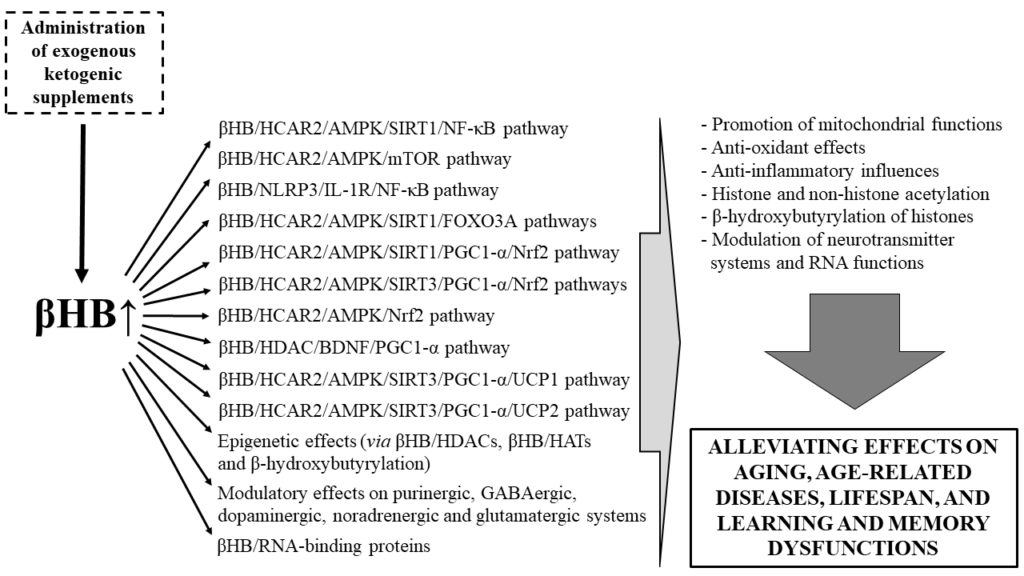 Evidence suggesting that EKSs may have anti-aging and neuroprotective effects

In addition to KDs, EKSs are under investigation in both animal and human studies. Our recent review details published studies that have investigated MCTs, βHB (alone or in combination with minerals or acetoacetate) and Ketone esters. Main findings are discussed at length and summarized in tables but here are the key takeaways:

EKSs-evoked ketosis may also influence all the previously mentioned pathways (e.g., mTOR, AMPK and SIRT) and their downstream signaling pathways, leading to attenuation of pathological age-related events (such as inflammaging, for instance).

The figure below summarizes the main signaling pathways associated with aging hallmarks, including how a few interventions (metformin as a senomorphics drug, caloric restriction and exogenous ketogenic supplements) may improve age-dependent biological processes. 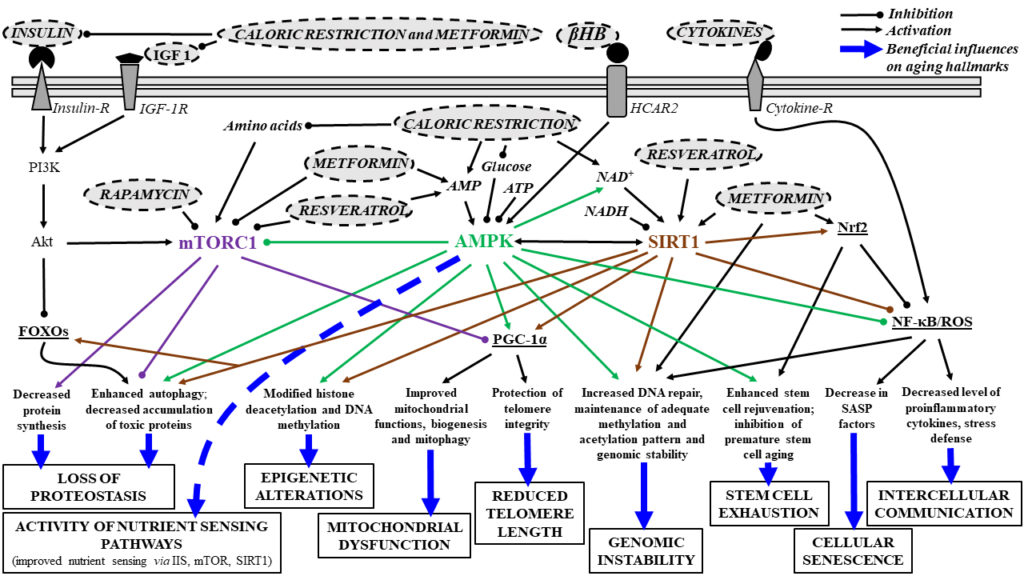 Why is this relevant?

Exogenous ketone supplements have increasingly become commercially available and are under investigation to test their therapeutic potential in multiple clinical conditions. These supplements can induce ketosis in the absence of a strict ketogenic diet or augment diet-induced ketosis, possibly making them an appealing long-term alternative to a strict KD. Theoretically, EKSs-induced modulation of these signaling pathways mays be able to improve symptoms and/or delay onset of not only aging-related hallmarks), but also age-associated NDs, and to extend lifespan (directly via βHB mediated pathways and indirectly via decreased glucose and insulin levels).