The prevalence of non-alcoholic fatty liver disease (NAFLD) is extraordinarily high, affecting approximately a quarter of the global population, and is increasing at an alarming rate.

NAFLD is characterized by the accumulation of fat in the liver that is not caused by alcohol consumption and encompasses a spectrum of liver conditions that can ultimately progress to nonalcoholic steatohepatitis (NASH), cirrhosis, and eventually liver failure. NASH is essentially an inflamed liver caused by fat accumulation, which if left alone, can lead to cirrhosis (advanced liver scarring and damage). Mild cases of NAFLD (early stages of NASH) can be reversed, and about 25% progress to NASH.

NAFLD correlates strongly with the increased rates of insulin resistance, type-2 diabetes, obesity, and metabolic syndrome, which are all considered risk factors for NAFLD. In fact, the prevalence of NAFLD in non-obese is ~15% and as high as 80-95% in obese. Concerningly, more and more children are being diagnosed with NAFLD, which was historically unheard of prior to the obesity and diabetes epidemic.

What’s going on? Why are so many people storing fat in their liver? 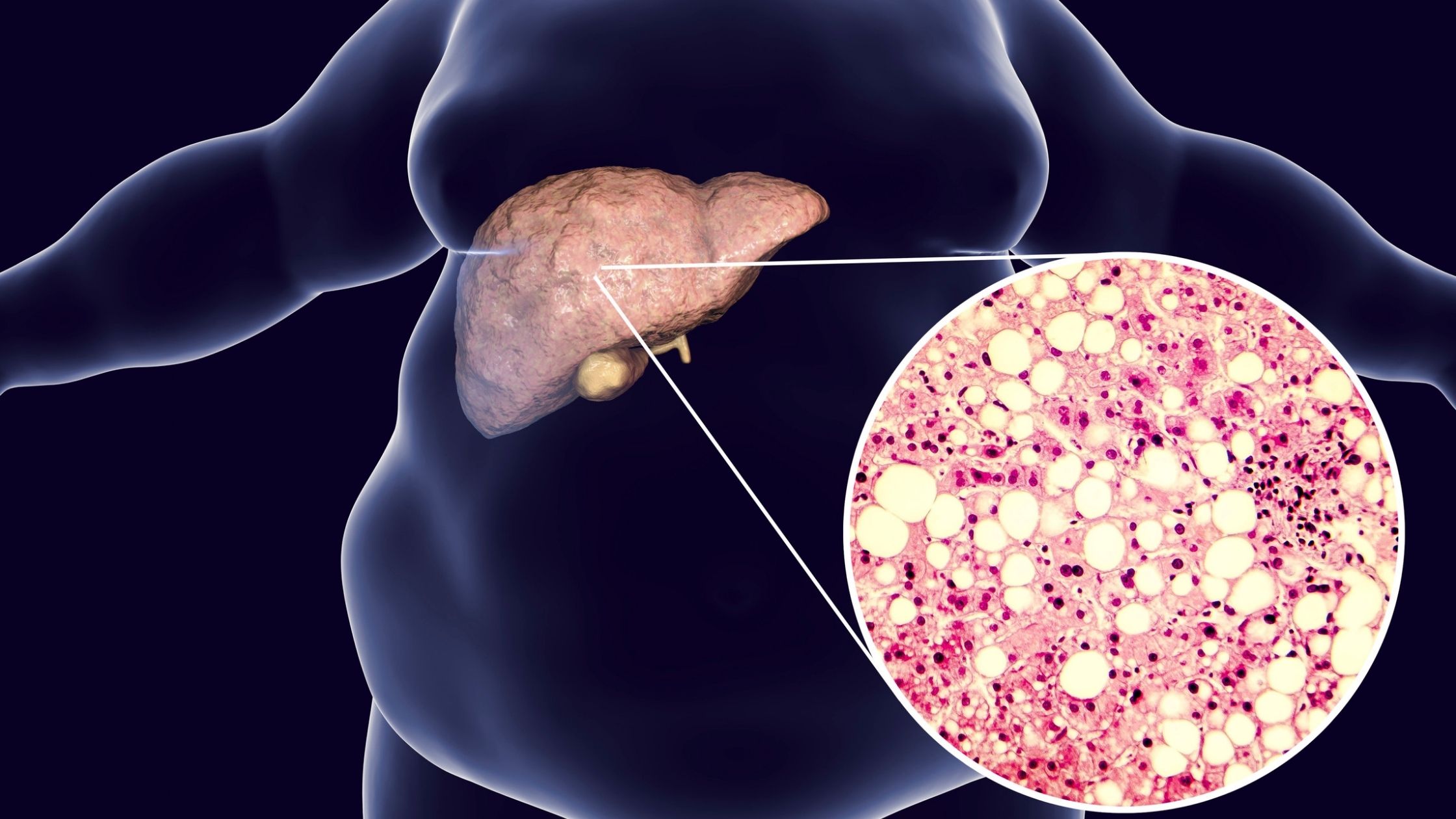 Just like muscle protein synthesis must surpass muscle protein breakdown in order to build muscle, liver fat is the result of an imbalance of triglyceride formation and removal, in favor of the former. The liver receives fatty acids to store as fat from three routes: de novo lipogenesis (DNL; the conversion of sugar to fat), the breakdown of stored body fat, and dietary fat. It’s thought that DNL is a significant contributor to liver fat accumulation, suggesting that excess calories in the form of carbohydrates are driving NAFLD.

It’s true that high sugar intake is associated with a greater risk of metabolic diseases, of which NAFLD belongs, but recent research suggests it’s not just sugar, but the type of sugar, and particularly, fructose. Sugar is consumed in several forms, such as glucose or fructose (sucrose, or table sugar, is a mix of glucose and fructose). When we ingest glucose, blood glucose rises and insulin is secreted to shuttle glucose out of the blood and into our tissues to be used immediately as fuel, stored as glycogen, or if glycogen stores are full, converted to fat (DNL). If we are overweight or obese, there is a greater likelihood of storing excess glucose as fat in places it shouldn’t be stored, such as the liver. Fructose on the other hand is thought to contribute to NAFLD independent of body weight due to its direct delivery to the liver upon consumption without the need for insulin and promotion of DNL.

In a study published earlier this year, three types of sugar-sweetened beverages were compared: glucose, fructose, or sucrose (and a 4th group that did not contain any sugar-sweetened beverages) for 7-weeks. At the end of the study, the fructose and sucrose groups showed double the amount of fat production in the liver. These results were not seen in the other two groups (glucose and control). The amount of sugar consumed daily in this study was about ~2 cans of soda. Sugar-sweetened beverages are a significant source of fructose as most are sweetened with high-fructose corn syrup. Even “healthy” sweetener alternatives are of concern, such as agave, often marketed as a healthier alternative to sugar, despite being ~75-90% fructose. If you are going to consume carbohydrates, it is always best to consume them in their whole-food form (e.g., ideally high-fiber fruit and vegetables). 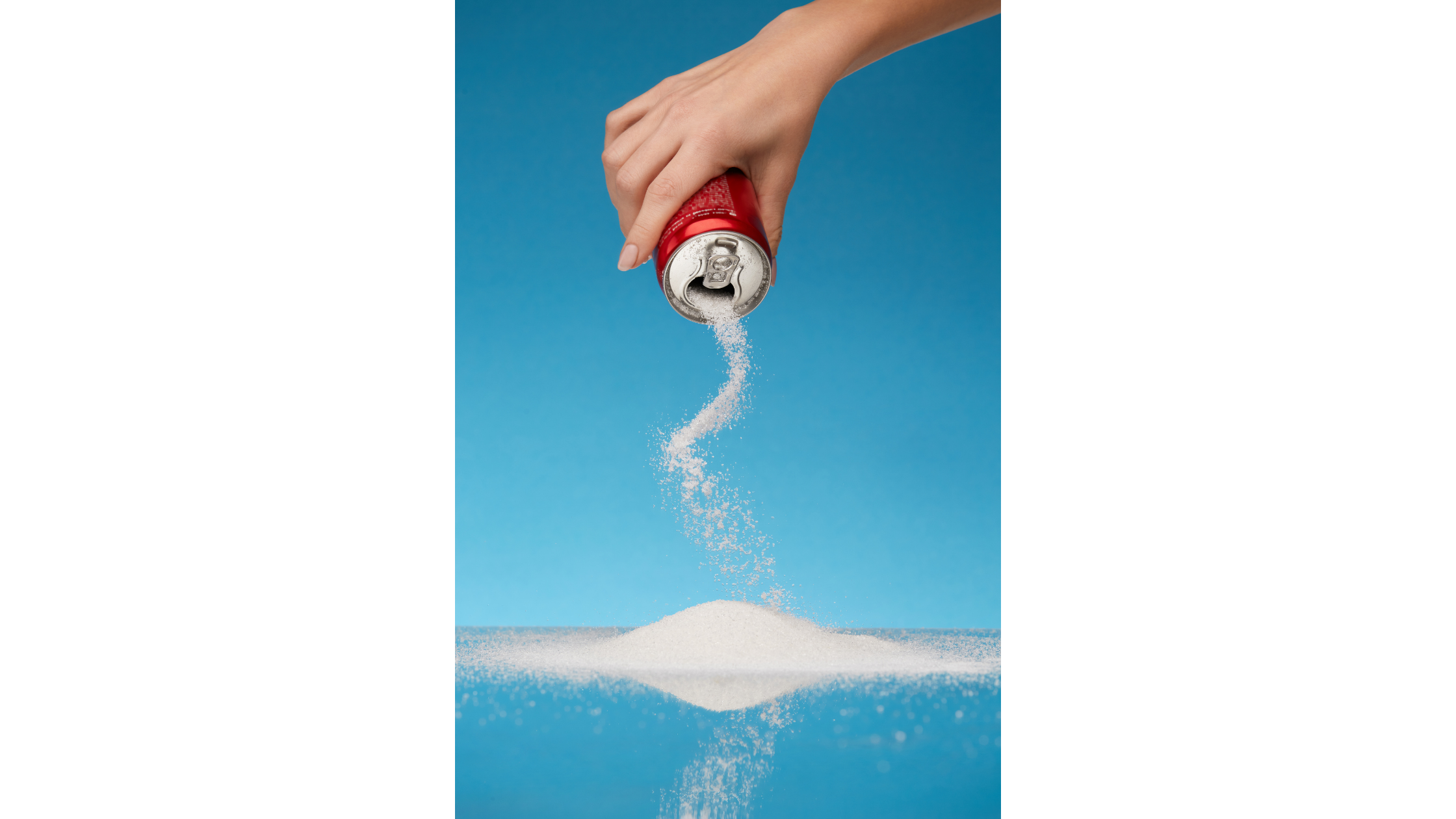 So, too much fructose can be an issue even if you are at an ideal body weight and metabolic health. Whereas, too much glucose becomes an issue if you are insulin resistant and/or obese. This is because it’s more difficult to appropriately store glucose in the context of caloric surplus (when liver glycogen is topped off), so it can end up being stored as visceral fat such as in the liver.

Fatty liver also exacerbates insulin resistance, creating a vicious cycle with major impacts on blood sugar regulation and metabolic endocrine control. Notably, if the liver can’t respond to insulin appropriately, then it doesn’t receive the signal to shut down hepatic glucose output, which essentially means that the liver is raising blood sugar when it shouldn’t be resulting in higher than normal blood sugar levels and following by concomitant hyperinsulinemia (high insulin levels). A recipe for progressive metabolic syndrome.

Yes. Choline is required for the export of fats out of the liver. Essentially, without enough choline, we can’t make the LDL particles that shuttle triglycerides out of the liver. You can get choline from eggs, high protein foods since the amino acid methionine is a precursor to choline, nuts, and vegetables.

What about a ketogenic diet?

Carbohydrate restriction and specifically ketogenic diets are used clinically to reverse and/or improve outcomes of several metabolic conditions, including those that increase the risk of NAFLD. It seems counterintuitive to consume a high-fat diet when you are trying to reduce fat in the body, but in the near absence of carbohydrates and thus low insulin states, dietary fat is converted to ketone bodies. This actually helps prevent the formation of triglycerides in the liver, as the liver exports these ketone bodies to be burned as fuel by other tissues. Interestingly, carbohydrate restriction may reduce liver fat through mechanisms independent of caloric intake/weight loss. One study compared caloric restriction (prescribed 1200 cals/day) to carbohydrate restriction (prescribed <20 g/day) in patients with NAFLD for 2-weeks. Although both groups lost weight and showed improvements in NAFLD, the carbohydrate-restricted group showed a greater reduction in liver fat despite consuming on average 200 calories more per day. This study revealed that participants on the low-carbohydrate diet had greater rates of fat oxidation, which is a common observation in ketogenic research, but that this favorably affected liver fat oxidation. But, weight loss itself promotes the reversal of NAFLD, and ketogenic diets can support weight loss through an inadvertent reduction in food intake possibly due to increased satiety of fat and protein, and ketone bodies themselves.

Recall that NAFLD can trigger inflammation, oxidative stress, and eventually fibrosis (liver scarring). Emerging research supports roles for ketone bodies that extend beyond metabolism. For example, the primary ketone body, beta-hydroxybutyrate (BHB), may promote oxidative stress reduction through epigenetic modifications that upregulate stress resistance genes. Additionally, BHB has been shown to inhibit inflammasome activity and therefore produce an anti-inflammatory effect by suppressing the production of pro-inflammatory cytokines. Through various mechanisms (reduction in oxidative stress, inflammation, and body weight) it is possible that ketone bodies may directly benefit NAFLD. Interestingly, mitochondrial metabolism of the ketone body, acetoacetate (AcAc) has been experimentally shown to protect the liver against diet-induced fibrosis.

The hypothesis that ketones may improve NAFLD was recently tested in mice. Mice were given free access to an obesogenic diet for 10-weeks in order to induce NAFLD before being randomized into one of three groups for 12-weeks:

At the end of the 12-weeks, the results showed:

This is the first study to specifically look at the effects of ketone supplementation on fatty liver and shows that ketone supplements reverse the progression of NAFLD progression in mice. Whether or not these results can be extrapolated to humans remains unknown, but this is remarkable preliminary data. What’s even more intriguing about these results is that even when calories were matched, greater improvements and weight loss were observed in the ketone ester group. The current recommendation for NAFLD patients is weight loss by reducing calorie intake. These results suggest that exogenous ketones improve markers of NAFLD beyond the effects of caloric restriction alone. Since there are no FDA-approved therapies for NAFLD, these findings are very exciting given the safety and accessibility of ketone supplements. More research is needed to confirm the benefits of exogenous ketones for NAFLD, and we hope to see these studies soon!

Altogether, NAFLD is a serious health concern and is an independent risk factor for cardiovascular disease, liver failure, and all-cause mortality. Given its increasingly high prevalence across the globe, the search for viable treatment options is of high priority. Beyond maintaining a healthy body weight, engaging in regular exercise, reducing fructose and overall carbohydrate consumption, and consuming adequate choline, exogenous ketone supplements may be a potential preventative and/or treatment option for NAFLD.