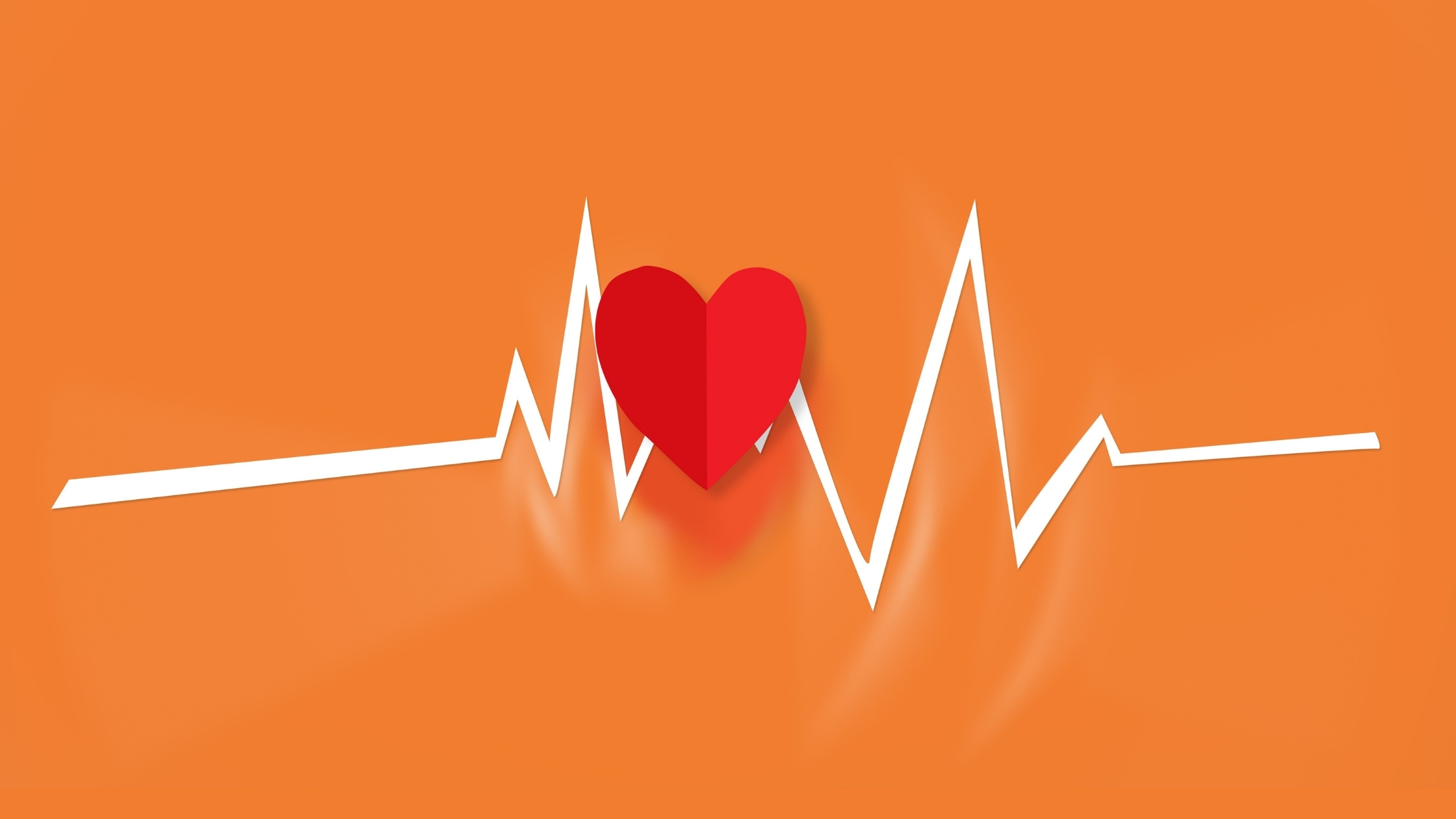 Earlier this year, a study was published on the effects of ketones and heart health. 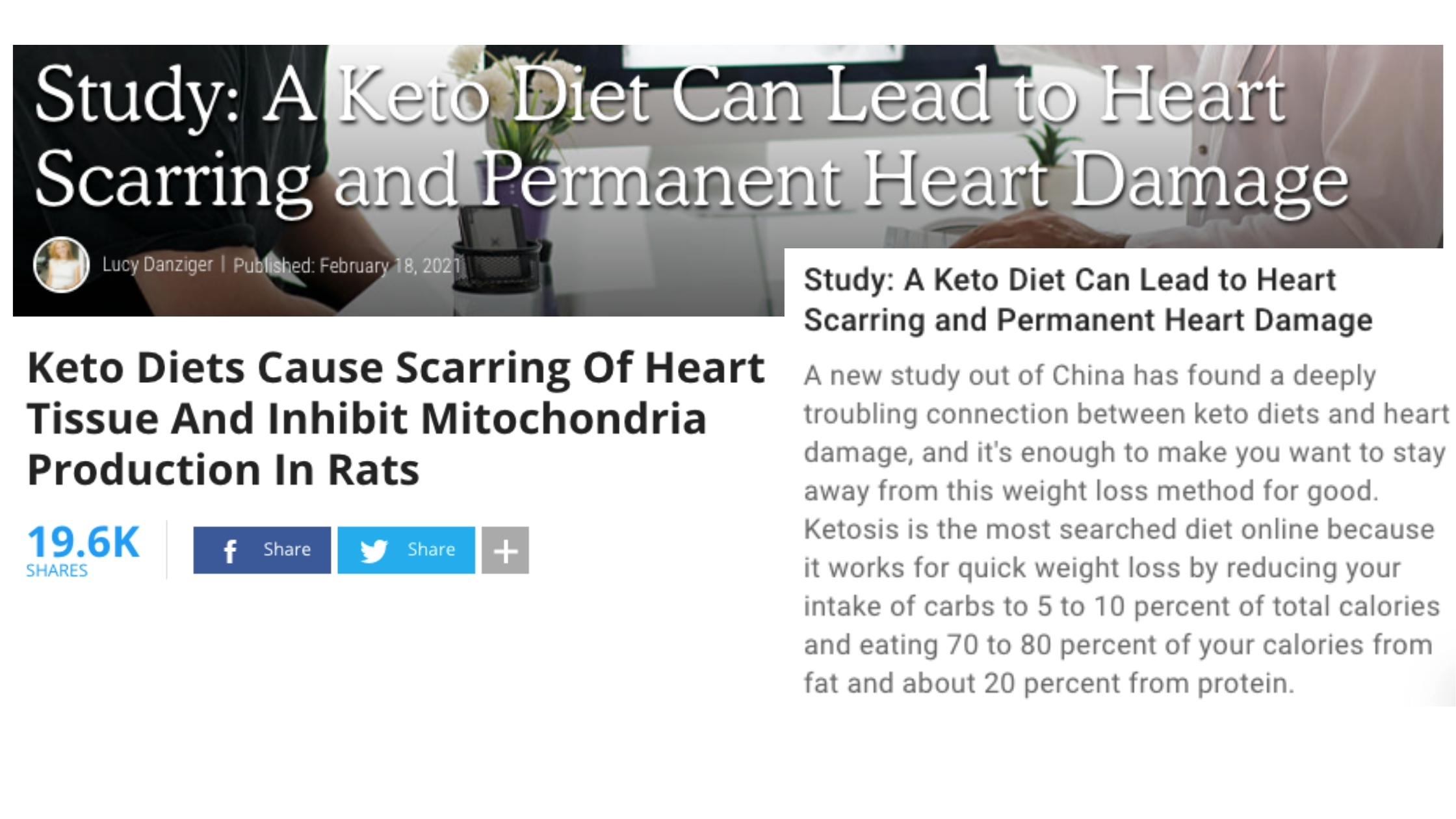 With an obvious interest in ketosis, we delved into the details of the study to see whether these catchy headlines support the conclusions of the study.

We first considered what this research designed to test and what background information the research group was going off of.

Their primary concerns with a KD for heart health were based on the observations that ketones, namely beta-hydroxybutyrate (BHB, are elevated in heart tissues of patients with atrial fibrillation (AF), and elevated blood ketone levels are associated with adverse cardiovascular events in patients undergoing hemodialysis (treatment that filters waste and water from the blood). They also reference a few studies that were either outdated or irrelevant, according to numerous ketogenic diet experts (including 2 leading experts from John Hopkins), where strict ketogenic diets are used very long term (sometimes decades) for the medical management of epilepsy.
This study set out to determine the effects of a KD and ketones (BHB and acetoacetate) on heart function in cultured cells, animal models (rats), and human clinical samples — which as far as scientific research goes, is a home run. As a quick overview: they took animals and put them on these three different diets, then they injected animals with ketones, and finally, they grew cardiac myocytes in cell culture and treated them with ketones. While they didn’t explicitly state their hypothesis in the introduction (odd that reviewers did not catch this) they did state that their results support the hypothesis that “high levels of BHB* may induce cardiomyocyte apoptosis by inhibiting mitochondria-mediated oxygen utilization” and “decrease in mitochondrion numbers may lead to cardiomyocyte apoptosis.”

But before we unpack further, here is some background information for a better understanding of the study methods and results:

Cardiomyocytes are the primary cell type of the heart and make up our heart and cardiac muscle. Cardiac fibrosis is a scarring event in the cardiac muscle and is associated with the onset of AF. Cardiomyocyte apoptosis, or programmed cell death, may be an early sign of heart failure and contributor to cardiac fibrosis. In AF, chronic stress can lead to apoptosis of cardiomyocytes and this is largely due to failure of the mitochondria to support the energy needs of the heart in the form of ATP since mitochondria are the primary site of ATP production. So, mitochondrial dysfunction and disturbance of energy metabolism can trigger an “energetic crisis” related to the onset of apoptosis-induced AF.

Ok, now to the study.

Four types of cells were used for the cell culture portion of this study: rat cardiomyoblasts, mouse cardiac muscle cells, human cardiomyocytes, and mouse embryonic fibroblasts which were all treated with BHB. The use of these four cell-based model systems represents a significant effort on the part of the investigators.

The animal portion of this study included three different diets which were followed for 16-weeks:

In addition to two more groups that received injected BHB or AcAc every other day for 16-weeks in combination with a normal diet.

Notes and concerns about these interventions:

To examine the effects in humans, they used the cardiac tissues of patients with AF. Their rationale was that cardiac fibrosis is associated with the onset of AF, and that ketone bodies are significantly increased in heart tissues of patients with AF. Atrial fibrillation is a form of arrhythmia or irregular and often rapid heart rate that can increase the risk of heart-related complications (e.g., stroke, heart failure, etc.).

Right off the bat, the human data is irrelevant to the question of whether ketogenic diets inhibit metabolic function and induce cardiac fibrosis. These human samples were from patients with rheumatic AF which does not tell us anything about what happens to the human heart in response to a ketogenic diet. Also, previous research has shown that heart tissues elevate ketone levels during failure, but this is thought to be a compensatory response to mitigate the metabolic stress associated with heart failure, not cause it.

What did their study find?

Through a series of experiments involving various molecular techniques, the general finding was that an elevation of BHB inhibited HDAC2, increasing the expression of Sirt7, which they concluded was responsible for inhibiting mitochondrial biogenesis in their heart samples and that this ultimately led to cardiomyocyte apoptosis and cardiac fibrosis. These changes seemed to be occurring via alterations in histone acetylation via HDAC2 inhibition, however, they did not actually show that BHB was downregulating or inactivating HDAC2 in their samples. Further, we thought it was strange that they did not consider measuring changes in BHB-butyrylation, which is a direct BHB-induced histone modification associated with a wide range of epigenetic effects linked to cellular protection. Moreover, these results conflict with previous research showing that Sirt7 may actually be cardioprotective and support mitochondrial function.

An interesting and off-topic finding that was pointed out to us by Bob Kaplan at Attia Medical was that despite eating more calories than the calorically restricted animals, those in the ketogenic diet group weighed the same but significantly less fat mass by week 16. See figure below. 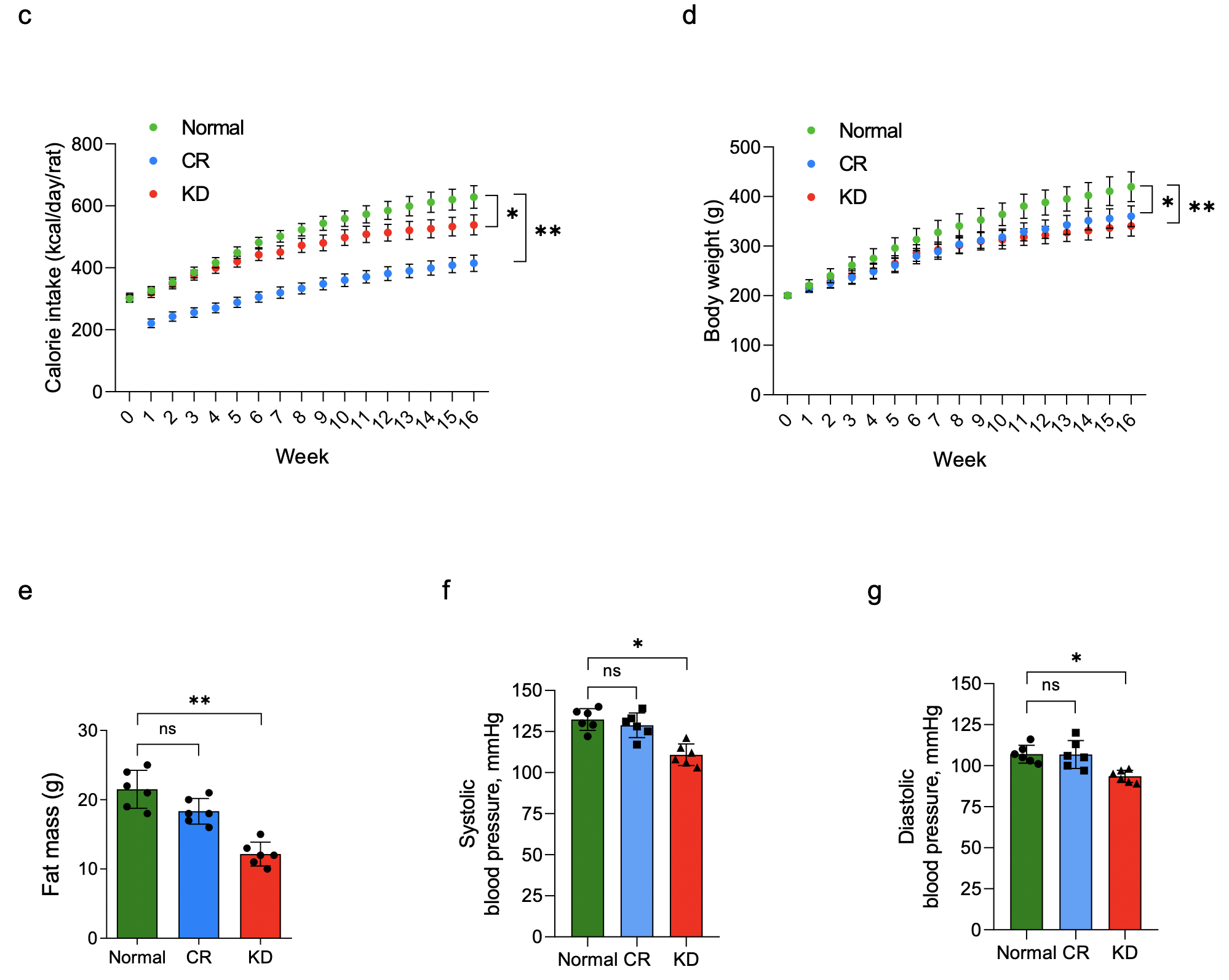 What other research is out there looking at the effects of ketones and ketogenic diets on heart health?

It is well known that fatty acids are the chief fuel for mitochondrial ATP production in the normal adult heart, and mitochondria contribute up to 30% of the total cell volume in heart cells, which is much higher than other organs. Interestingly, in proportion to availability, cardiomyocytes will selectively and preferably burn ketones at the expense of fats and glucose. We have several lines of evidence to suggest the heart loves ketones, and that they may actually support and improve mitochondrial function and biogenesis, not inhibit it – studies conducted in isolated mitochondria provide evidence that ketones enhance mitochondrial metabolism.

Changes in energy metabolism in the heart do contribute to heart failure, and several model systems show that the inability to burn fat and ketones in the heart results in worse cardiac outcomes. For example, humans with genetic defects in fat metabolism do not respond well to energy stress such as prolonged fasting, and this can actually lead to cardiomyopathy. In addition, genetically modified mice unable to burn fats (and/or ketones) have heart failure in response to metabolic stress and fasting, too.

Early work by Dr. Richard Veech (who pioneered what we know today about ketone metabolism) and colleagues showed that in rat hearts, ketones generate more cellular energy than glucose alone, or put another way, that ketones showed greater metabolic efficiency in the heart. In mice, deranged sugar metabolism leads to heart failure, and ketogenic diets have been shown to prevent this from occurring and rescue the failing heart. Furthermore, in human trials, ketogenic diets have been found to reduce cardiovascular risk factors in type-2 diabetics.

Lastly, what better population to glean insight on the long-term effects of ketogenic diets on heart health than those who have been following a ketogenic diet long-term. 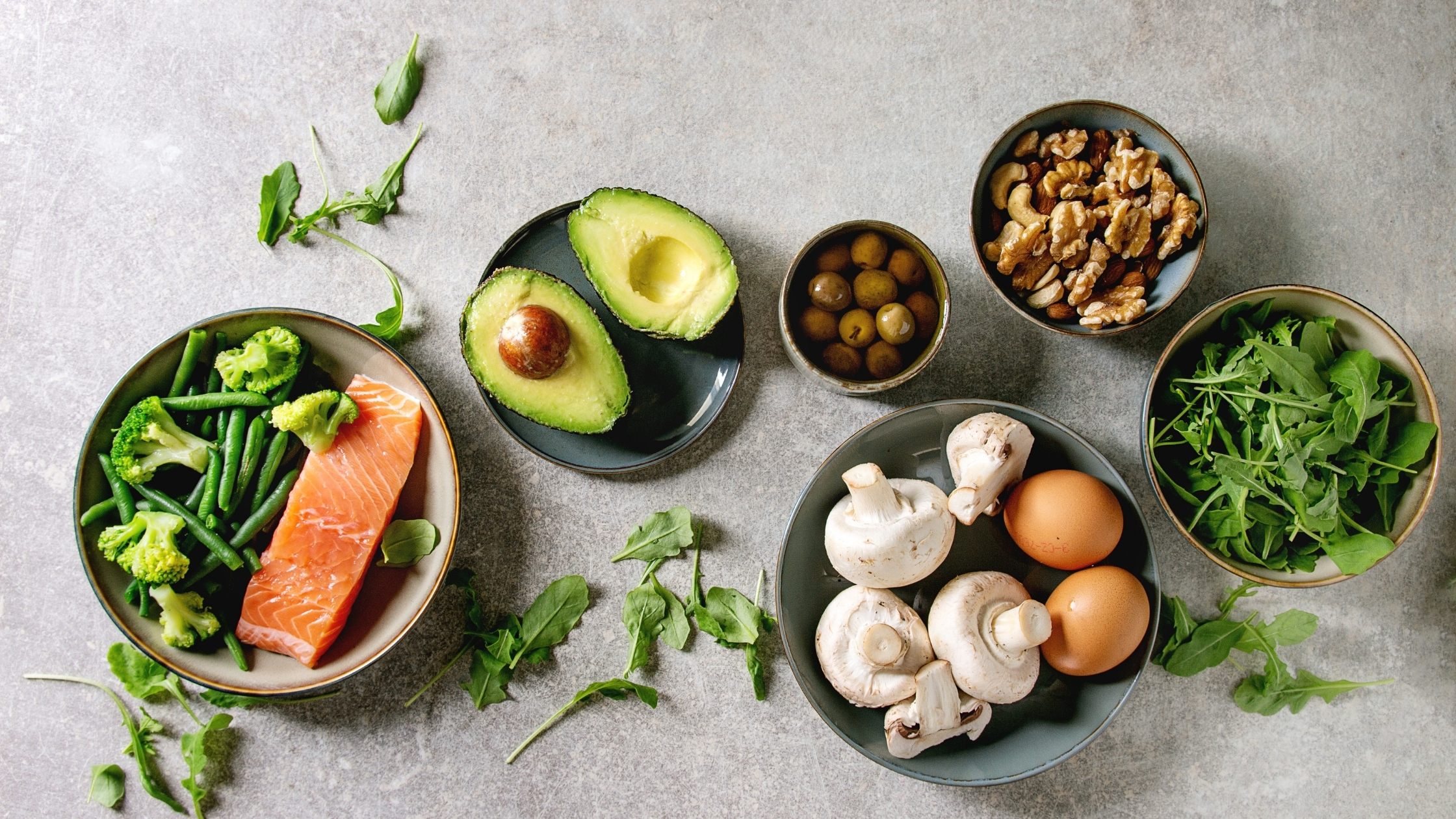 Dom reached out to numerous clinicians who have experience applying, publishing on, and monitoring side effects in response to long-term (10-30 years) therapeutic ketogenic diets in patient populations who graciously provided their feedback on this topic. Here is a quote we received from an email correspondence: “Thanks for sharing the literature about effects of BHB on cardiac function/risk of fibrosis. I had not seen that and fortunately none of my diet patients on long-term diet therapy have experienced any cardiac events. I have one patient who’s been on a classic ketogenic diet since 1976, one for ~30 years, and another (Glut1) for ~20 years”.

If ketogenic diets cause negative cardiovascular consequences it would most surely be overtly demonstrated in the patient population using the diet for long term medical management of these neurological disorders. With that said, it needs to be pointed out that the ketogenic diet is associated with several well documented side effects, but these are often transient (constipation, etc.) and can be managed through proper implementation of dietary guidelines and supplementation that have been well described.