Can Ketones Protect Against Brain Injury? 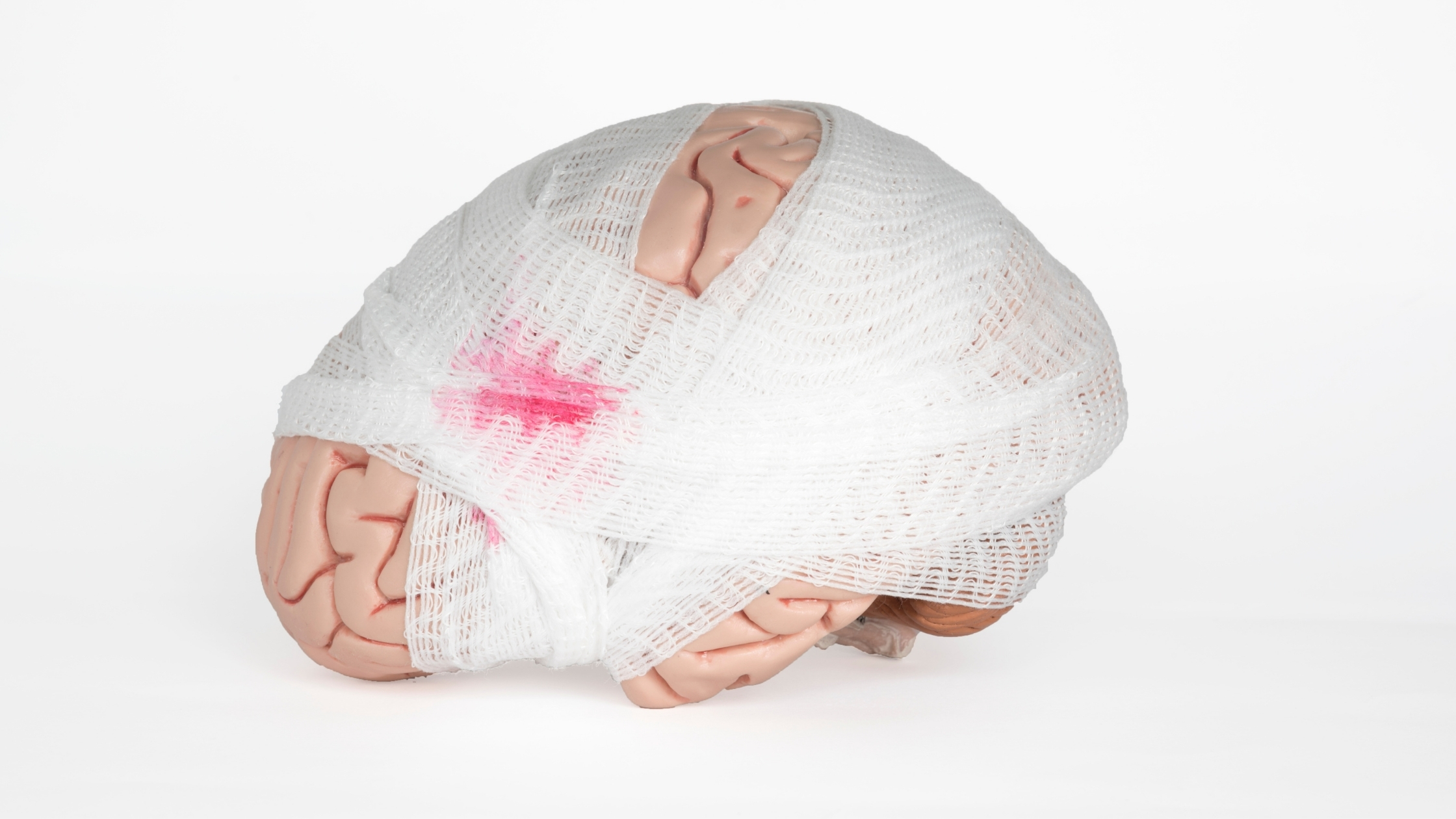 Brain injuries, for example, traumatic brain injury (TBI), stroke, and spinal cord injuries are highly prevalent and can affect us at all ages. In the US, it’s estimated that stroke affects nearly 800,000 people, while 2.5 million people suffer from TBI every year. Spinal cord injuries are estimated to affect almost 18 000 patients yearly, with only 0.6% of admitted patients experiencing a full recovery. All of these injuries can have long-lasting and devastating consequences with a multi-billion dollar price tag attached to them. In recent years, ketosis has been in the spotlight as a potential treatment for brain damage and recovery from brain injury.

Ketones and the brain

Our brain needs energy and oxygen to survive. The primary energy source for the brain is sugar (glucose) unless you are engaging in some form of fasting, follow a very low carbohydrate ketogenic diet or consume good quality exogenous ketone supplements. This is because ketones (and to some extent lactate) serves as an alternative to glucose. In fact, ketones can account for up to 70% of the brain`s energy needs during conditions such as prolonged fasting.

Ketones are produced by the liver when glucose levels are low and can no longer meet the energy demands of the brain or can be consumed in a form of an exogenous ketone supplement to rapidly induce a state of ketosis without necessarily changing one`s diet to be restricted in carbohydrates.

There are several lines of evidence to support the neuroprotective effects of ketones and in the face of brain injury, ketosis may be a powerful intervention for preventing and/or overcoming brain damage.

Ketones may offer neuroprotection by:

It is a fascinating property of the brain that an insult or trauma enhance ketone utilization by increasing ketogenic enzymes, transporters, etc. However, if we aren’t actively restricting carbohydrates, abstaining from food completely (fasting), or supplementing with exogenous ketones, the brain can upregulate all the necessary pathways it wants, but without ketones present there is no use. This represents a potential therapeutic opportunity to supply the brain with ketones when it, theoretically, is under metabolic constraints that impair brain energy metabolism and repair. Consistent with this hypothesis, it has been shown that glucose will decrease and ketones will increase the stability of brain networks, which are essential for the restoration of normal CNS function and repair.

We collaborated with our colleagues at Cornell University and the University of Bristol to conduct a systematic review of all evidence showing the neuroprotection of ketosis in acute brain injury.

The review was published last month in the Journal of Neurochemistry and can be accessed here.

From the database search, 49 articles met the inclusion criteria and were used in our meta-analysis. The study wanted to assess whether ketogenic interventions reduced mortality, neuronal damage, and neuronal dysfunction in mammal models by aggregating all the pre-clinical experimental evidence over the last 40 years. 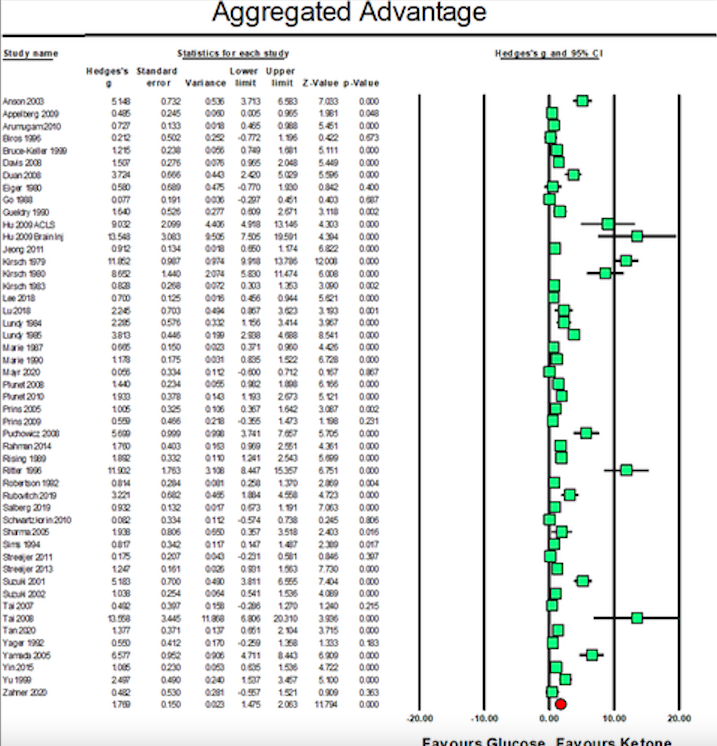 The only predictor of the protective effect of ketones was the level of blood ketones, independent of how ketosis was induced (fasting, ketogenic diets, or exogenous ketones) or when ketosis was initiated (before or alongside the insult). This suggests that ketones are the variable responsible for neuroprotection and that the greater the ketone availability (higher blood ketone levels within the physiological range) the greater the therapeutic potential.

The capability of neurons to reap the benefits of ketones not only depends on their availability, but also their transport and utilization. Ketones use a specific transporter (monocarboxylic transporters; MCTs), and these transporters are expressed to differing degrees depending on age and the foods you eat. For example, babies and young children have a high expression of these transporters, and though they decline in adulthood, ketogenic diets trigger increased expression. That said, our results still showed that ketones offered profound neuroprotective effects in adult samples, even when ketosis and brain injury occurred at the same time (i.e., no time for the upregulation of ketogenic enzymes and transporters). We suspect that as neurons lose efficiency for glucose metabolism after brain damage, these ketogenic pathways are rapidly upregulated so that the brain can effectively rely on ketones post brain insult.

Interestingly, although spinal cord injuries would theoretically respond to ketogenic treatments due to the metabolic vulnerabilities of spinal neurons, our results showed greater benefits for the brain. Further analysis revealed that these differences were most likely due to the nature of the insult: ischemic vs non-ischemic. The studies included in our review pertaining to spinal cord injuries only included non-ischemic insult, whereas most of the studies in the brain were ischemic. Ischemia triggers a neuronal energy crisis, often related to glucose, and can lead to the accumulation of the excitatory neurotransmitter, glutamate, which can ultimately lead to neurotoxicity. Our results showed that the neuroprotective effects of ketosis were greater against ischemic insults, which is likely due to ketones mitochondrial and antioxidant support.

Altogether, our review shows that ketosis possesses strong neuroprotective effects against acute brain damage in mammal models, as shown by the reduction in mortality, and of neuronal damage and dysfunction. Importantly, the level of blood ketones is directly proportionate to these neuroprotective effects. Due to the possibility that ketosis can be achieved rapidly with exogenous ketones, these results suggest their application may be of particular interest that future research should address!