How Age and Gender Affect Ketosis

Little research has addressed whether age and gender impact how the body may respond to exogenous ketones, until now. Our latest manuscript focused on a project examining this important and neglected topic.

There are telling signs in the literature dating back to the 1970s suggesting that women and men may respond differently to a metabolic intervention and that this may be further modulated by age. For example, women experienced a more rapid increase in blood ketones and decrease in blood sugar during a short-term fast, compared to men. Studies on animal models also have shown that the enzymes involved in ketone body utilization change throughout the lifespan. In one of our earlier study we have also demonstrated in rats that exogenous ketone-induced lowering of blood glucose varies between age groups.

This means that the therapeutic effects of nutritional ketosis may be age- and gender-dependent. These may influence their application when it comes to different diseases, which has been observed before. It’s been shown that a ketogenic diet improves physical and cognitive recovery after a traumatic brain injury in young, but not older rats. The ketogenic diet also appears to have a stronger antiepileptic effect in younger animals and children than adults.

All of these previous results inspired us to ask whether age and gender influence how the body may respond to exogenous ketone supplements.

In our recent investigation, we addressed these very questions.

We took a group of rats of both genders and administered exogenous ketones (2.5g/kg) once a month over 17 months, beginning when the rats were one month old. Blood ketone and glucose levels were measured one hour after administration of ketones. In this study, the exogenous ketone used was a ketone ester (acetoacetate diester) in a 1:1 mixture with medium chain triglyceride (MCT). 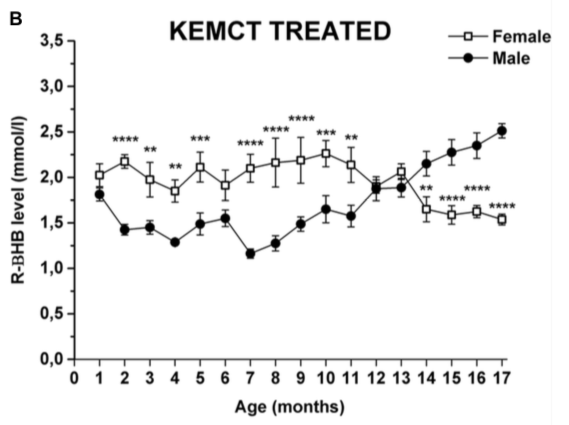 Inversely related to blood ketones, blood glucose levels were lower in younger female rats, but rose as they aged, while in males, blood glucose continuously trended downwards with age, after exogenous ketone treatment. 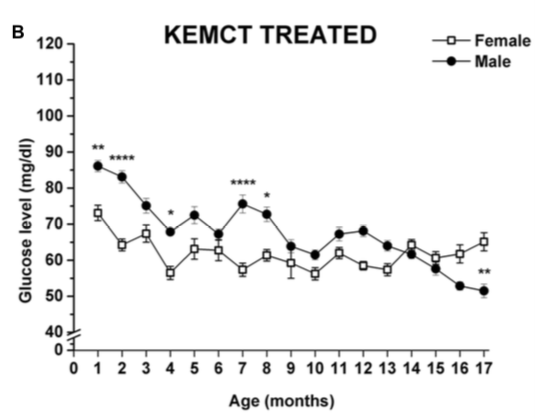 This is the first study looking at the effects of exogenous ketones on blood ketone and glucose levels over long-term and stratifying the results based on gender.

So, why are there differences between younger and older rats, and female or male rats? What do age and sex have to do with this?

Many studies have found that age affects the expression of certain enzymes and transporters involved in ketone and glucose metabolism, that are most likely influencing how well these metabolites get into our tissues, and their metabolism can change with age:

The bodyweight of females were significantly less than that of males throughout our study, which we thought could have explained the differences in blood glucose and ketones. However, the control group had similar glucose and ketone levels suggesting bodyweight was not responsible.

It is known that changes occur with prolonged ketosis (keto-adaptation) that optimize ketone transport and metabolism, so it is unlikely that the administration of exogenous ketones once a month for 17 months would incur such changes. It is more likely that the changes observed in this study are related to the changes in the expression and activity of ketone metabolizing enzymes and transporters over time. Previous research has found that digestion and absorption of fat changes with age, suggesting one’s response to a ketogenic diet may also change with age. It would be interesting to see how age and sex influence the response to exogenous ketones in keto-adapted individuals.

This study confirmed previous findings that:

All of these findings suggest that different doses of exogenous ketones and different blood ketone levels may be needed to be an effective treatment depending on the age group and gender, but ultimately, more research is needed!

To wrap it up, emerging research on metabolic therapies, including the use of exogenous ketones, suggests that nutritional ketosis has the potential to improve quality of life and treat several neurometabolic and age-related diseases. It appears that exogenous ketones affect female and male rats differently and that these differences are also influenced by age. These differences should be taken into consideration when using such treatments for metabolic-based therapies. Finally, because the research is mostly limited to animal models, monitoring blood ketone and glucose levels may be necessary to ensure safe and effective doses of exogenous ketones for different age groups and genders.

We look forward to future research that will help understand the exact mechanisms causing these changes associated with exogenous ketones, and more importantly, how this research may translate to humans!