In previous posts we have covered the many benefits of nutritional (or fasting ketosis) for things like brain health, improving metabolic biomarkers, reducing pain, and even cancer management.  Since our metabolic response to ketogenic diets and fasting varies considerably, it becomes even more important to measure ketosis with precision to ensure therapeutic management of a disease process. In addition to the clinical utility of ketone measurements, the level of ketosis gives us a lens into our metabolic flexibility, and the resulting information can provide us with actionable feedback to improve our eating behavior.

What is Acetone and why is it important to measure?

Besides being a highly effective solvent used in things like nail polish remover, acetone is found naturally in plant and animals. When fasting or on a ketogenic diet, breath acetone is one of the three primary ketone bodies associated with being in a state of ketosis and is highly correlated with the level of ketosis. Ketone production is directly proportional to fat metabolism, so ketone levels can tell us whether we have dipped into our fat stores. For the keto-enthusiast, you might already be well-acquainted with beta-hydroxybutyrate, better known as BHB. After being produced in the liver, BHB is the most stable ketone and is what we assay when we draw blood to measure ketosis. On the other hand, acetoacetate (AcAc) is often measured in urine and is less stable than BHB. In fact, AcAc spontaneously breaks down (about 20% decarboxylates) to acetone, which readily evaporates (ie. is volatile) and expelled at a high concentration when we exhale while being in a state of ketosis.

We originally got interested in elevating and quantifying AcAc and acetone after observing that exclusively elevating only BHB had little effect at delaying central nervous system oxygen toxicity, which are powerful tonic-clonic seizures that result high brain concentration of oxygen (associated with Navy SEAL rebreather diving). We published these findings in 2013 in a study entitled “Therapeutic ketosis with ketone ester delays central nervous system oxygen toxicity seizures in rats”. Prior reports also demonstrated that elevation of AcAc (a source of acetone) and acetone alone prevents acutely provoked seizures in chemical, electrical, and audiogenic animal models (discussed in the manuscript above). Endogenous production of acetone is nontoxic and has considerable anticonvulsant effect at these subnarcotic concentrations (<0.5 mM). Very little is known about the anticonvulsant mechanism of acetone, but we suspect it may alter plasma membrane fluidity and neurotransmitter sensitivity, although these mechanistic studies still need to be done. Biosense is a device designed to measure acetone with accuracy and precision, as shown in this figure (exogenous ketone supplement administered at 1pm). 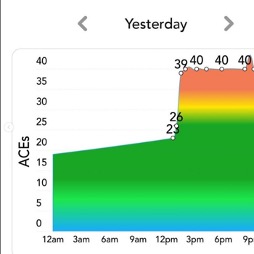 Readout Health developed Biosense®, which is currently the only medical-grade breath acetone device designed for tracking ketosis. The Biosense clinical trial was presented at the Metabolic Health Summit and showcased the technology and clinical data demonstrating a correlation of breath acetone with blood BHB. Based upon the current clinical train results, it is concluded that multiple ketone measurements are needed throughout the day to capture the full picture of daily ketone exposure. With blood ketones this would involve many finger pricks (and expensive strips), but puffing into a Biosense device is considerably less invasive and cost saving. The relationship between blood and breath ketones is temporarily shifted, and under certain conditions like fasting (see below) may vary depending on the individual’s metabolism and energy demand.  In the context of a eucaloric ketogenic diet, the area under the curve (AUCs) from breath or blood measurements is highly correlated. Biosense has been and/or is currently is now being used in numerous clinical trial protocols (eg. NCT04130724, NCT04542291). The Biosense device includes a free app with personalized ketone data and goal tracking that is Bluetooth enabled (when synced) with unlimited testing (no expensive strips needed). It is a Class 1 medical device that is eligible for a health savings account (HSA) and/or a flexible spending account (FSA), and qualifies for remote patient monitoring (RPM) to assist patients and healthcare providers via telehealth clinics. In addition to its clinical superiority when compared to other breath ketone devices, Biosense is now available to the broad market and integrates with an expanding list of mobile apps including Zero fasting app.  Based on research, user feedback and personal experience through using the device during fasting, we think that breath acetone is a superior biomarker for quantifying the metabolic response to fasting.

What does breath acetone indicate?

To put it simply, elevated breath acetone while fasting indicates that your body has made the “metabolic switch” from using sugar to fat and ketones as the primary fuel. Breath acetone will rise during a fast as the body mobilizes stored fat to meet its energy requirements as liver glycogen gets depleted. Researchers have proposed that breath acetone could be a marker of fat loss that can improve adherence and personalization to lifestyle changes aimed at improving health (e.g., fasting). Where things get tricky (for fat loss) is when following a ketogenic diet or using ketogenic supplementation (things like MCT oil), since you could potentially be in a neutral or positive energy balance but still registering ketones on your Biosense device. Regardless, even if not in a calorie deficit (needed for fat loss) you are still in ketosis, burning fat (dietary fat), and experiencing the many benefits of nutritional ketosis (eg. brain health, metabolic biomarkers, even cancer management). That said, being in a calorie deficit while adhering to a ketogenic diet is common and further augments ketone production and fat loss. Altogether though, we have found that measuring breath ketones is most applicable while fasting, and may actually be more reliable than blood ketone levels during a fast.

Changes in breath acetone during a fast

One study found that while fasting breath acetone rises slowly within the first 2 days, continuing to rise at a more rapid pace in the following days of a 5-day fast. 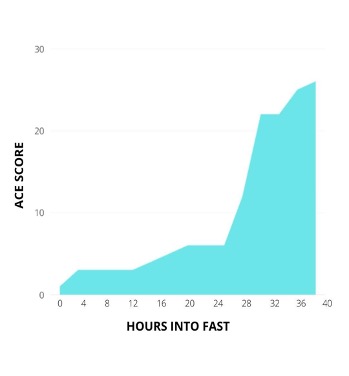 This figure shows Biosense readings taken every 30-minutes (while awake) graphed over a 38-hour fast beginning after a mixed meal (not ketogenic) without exercise. It’s almost as if at the 24-hour mark something switched and the fat-derived ketones quickly entered circulation. Why did we experience this sharp rise so much sooner than the participants in the study mentioned above? Well, if someone is no stranger to fasting and ketosis, it could be that metabolic flexibility helped promote a quicker transition into ketosis than someone who may be attempting fasting for the first time. 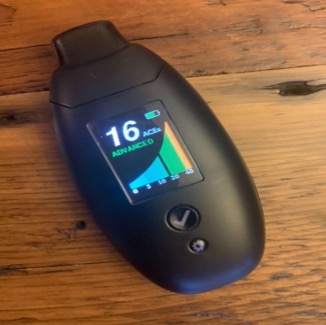 Dom found Biosense to be a highly accurate, precise, and cost-effective tool for testing ketones throughout the day. Measuring breath acetone is ideal for quantifying fat oxidation and metabolic flexibility while testing new foods and fasting protocols. See here for a metabolic snapshot that is typical after 60hrs of fasting (shown below). Breath acetone is often very high at this time point (>36hrs), but blood BHB levels (measured with Precision Xtra and KetoMojo) can stay within the 1.5 to 2 mM range, which may be indicative of high ketone utilization (blood BHB is a function of ketone production and utilization). Since being keto-adapted likely increases BHB uptake into tissues, the use of BHB may not be the most accurate index of ketosis, especially in the context of a calorie deficit when peripheral tissues are “hungry” for fuel. Thus, things like low-level physical activity (like walking) while fasting or sustained a calorie deficit may reduce blood BHB in proportion to breath acetone. We tend to see this in athletes since they have high rates of BHB utilization. In addition, it is common when fasting to see a reduction in blood glucose to a level that is clinically considered “pathological hypoglycemia”. In the example below Dom’s blood glucose levels were in the hypoglycemic range (48-58 mg/dL), but resulted in asymptomatic hypoglycemia due to being in a steady state of hyperketonemia. When first starting out, the stress of fasting (or even just low carb) can produce an elevation of glucose (resulting from higher cortisol, catecholamines and glucagon) and occasionally symptoms of hypoglycemia occur if ketone levels are not sufficiently elevated, so it is important to start off gradually with objective and subjective measurements to ensure adaptive changes in metabolic flexibility. 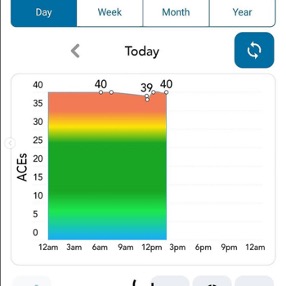 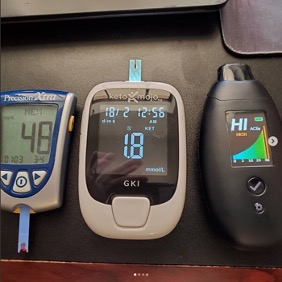 Breath acetone in the context of metabolic health

At the root of how breath acetone can be an indicator of metabolic health is the concept of metabolic flexibility. As mentioned above, elevated breath acetone indicates fat burning. Fat burning is optimized in the context of insulin suppression (glucagon elevation), depleted liver glycogen stores, reduced glycolysis, and high mitochondria energy demands (oxidative phosphorylation) that are associated with physical activity. Healthy mitochondria are required for optimal fat oxidation and ketone production, and if they lose their ability to do so efficiently (as with aging or excess calories), this can be pathophysiologically linked to insulin resistance and chronic inflammation. So, in the context of ketogenic diets, calorie restriction and fasting, breath acetone is a remarkable proxy for quantifying metabolic flexibility – a switch from sugar to predominantly fat as fuel. We should all be striving to achieve metabolic flexibility, since the inverse is associated with metabolic disease.

Before we start burning fat and ketones as our primary source of energy, we must first deplete our reserves of liver glycogen (glucose stores) to a threshold level. The modern diet and pattern of eating frequent meals throughout the day will rarely empty our glycogen stores since most people (excluding elite athletes) are never practicing their inherent metabolic flexibility. This is problematic because that also means most people are reliant on insulin to shuttle energy into our cells (fats and ketones do not require insulin), and chronically elevated glucose and insulin levels are hallmarks of type-2 diabetes and other cardiometabolic diseases. In addition, without the flexibility to tap into fat stores between meals or while fasting, your brain screams out for fuel despite having a large depot of untapped fat calories stored in adipose. This leaves most people a slave to food, constantly eating, snacking or binging to tame the hunger associated with being physiologically wired for high glucose demands.

What ACE level should you be looking for?

Biosense uses their proprietary units called ACEs. 1 ACE is equivalent to 0.1 mmol/L of BHB. For reference, nutritional ketosis is typically defined as blood BHB levels ranging from 0.5-3.0 mmol/L, so an ACE score of 5 would indicate ketosis. The higher your ACE score, the deeper you are in ketosis. 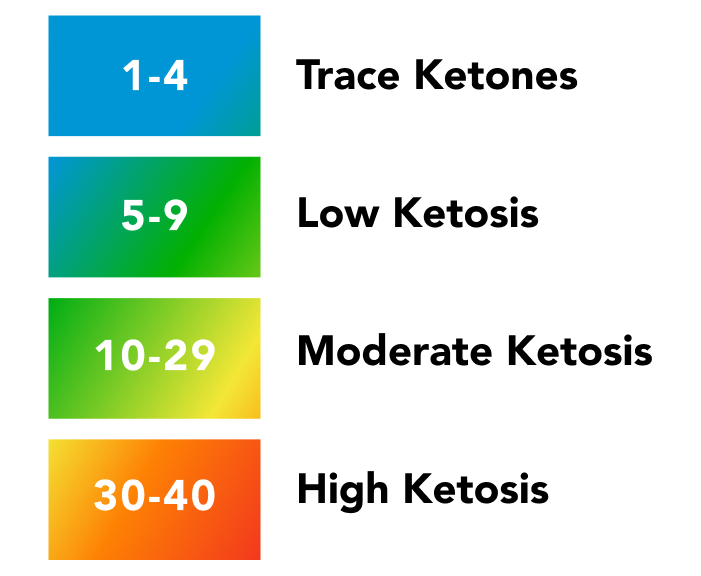 The duration of your fast will dictate the concentration of breath acetone detected by the Biosense meter. We recommend aiming for at least 5 ACEs (ideally 5 days/week), if your sole goal is to start enhancing metabolic flexibility. Thai should be relatively easy if you are adhering to a low carb diet in addition to fasting. Maintaining a score of 5-10 long-term may be associated with sustained weight loss, since this level of ketosis is typically associated with a mild calorie deficit. For those who want to achieve a deeper and potentially more therapeutic state of ketosis, we recommend aiming for over 10 ACEs. This level of ketosis would be consistent with individuals using ketogenic diets for the metabolic management of epilepsy or neurometabolic disorders. In addition, we have found that this level of ketosis can be easily achieved with a modified fasting approach (similar to a periodic fasting mimicking diet).

So, in summary, Biosense breath acetone meter is an important tool for the clinical monitoring of therapeutic ketosis. In addition, it can help you monitor your nutrition, ketone supplementation, exercise and fasting protocols to provide insight and feedback for actionable steps towards optimizing your metabolic health.