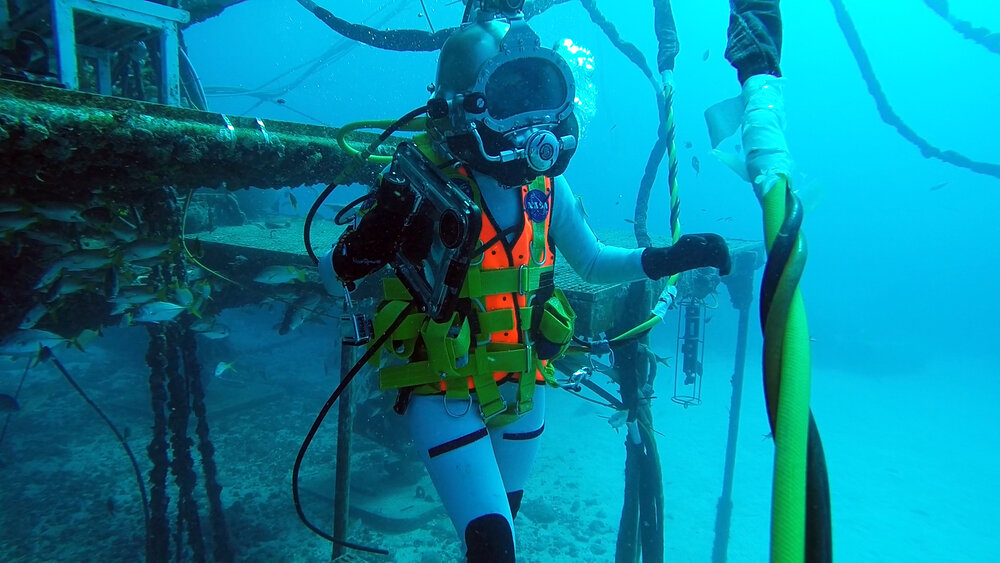 As many of you know our team participated in the NASA Extreme Environment Mission Operations 23 during the summer of 2019. In the upcoming blog posts we will give a little insight into some of the research objectives and preliminary results that were recently published in The Faseb Journal. In the first blog post we will discuss some of the results of Ari et al. 2020 on individual and team cognition in high stress underwater saturation environment under intense workload.

The objective of this study was to measure potential changes in cognitive function in response to living in an extreme underwater habitat.

What is cognition/cognitive function and how did we measure it?

Cognition refers to “the mental action or process of acquiring knowledge and understanding through thought, experience, and the senses”. Cognitive processes are, for example, attention, perception, memory, language, learning, and higher reasoning. We measured such processes on an individual level during the mission and also on a team level. Team cognition refers to the manner in which knowledge important to team functioning is mentally organized, represented and distributed within the team and allows team members to anticipate and execute actions. This can be important, as expert teams develop compatibility in members’ cognitive understanding of key elements of their performance environment and, by doing so, are able to operate efficiently, without the need for overt communication and they perform tasks more effectively.

As we all know, and probably everyone experienced it during their lifetime, chronic high stress and intense workload can affect individual and team cognition. As such, associated variables were monitored during the NASA Extreme Environment Mission Operation (NEEMO) 23 mission at the Aquarius reef Base during a 9 days long extreme saturation environment in June 2019.

Individual cognition was measured on 6 subjects (2 males, 4 females) with 8 tests using a battery of neurobehavioral cognitive assessments on an iPad, 1 day pre-mission, at mid-point of the mission and 1 day post-mission. In addition, 4 cognitive tests were applied on 5 subjects (2 males, 3 females) at the beginning of the simulated Extravehicular Activities (EVA) and at the end of EVAs that lasted for ~3 to 5 hours. To monitor changes in stress level, Short Stress State Questionnaire (SSSQ) and Generalized Anxiety Disorder (GAD7) scores were collected. We also measured the effects of workload on performance by NASA Task Load Index (TLX). Changes in team cognition was monitored using a battery of assessment on team cognitive processes.

What did we find?

There was a trend of increasing performance in individual cognition in-habitat and post mission, compared to baseline. The NBACK test, which measures working memory, significantly improved during the mission, compared to pre-mission and it further improved post-mission. The results of the psychomotor vigilance test (PVT), a computer-based test measuring alertness and vigilance, were non-significantly lower during the mission. The Motor Praxis Task (MPT), -a sensory -motor test, measuring the neurological process by which cognition directs motor action-, scores decreased at the beginning of EVA and further decreased by the end of EVA. The end of EVA MPT performance was significantly lower, compared to baseline, in habitat, and post mission measurements, suggesting that long duration extravehicular activity had a significant negative effect on sensory motor speed. BART test scores that are computerized measure of risk taking behavior, were significantly lower at the beginning of EVA, compared to baseline, suggesting that risk taking decreased with the start of the EVA. The psychomotor vigilance task (PVT) is also a computer-based test, which is a chronometric measure of an individual’s reaction to specified small changes in the environment and measures sustained-attention and reaction-time. The PVT score was significantly lower at the end of EVA, compared to baseline, in habitat, and the beginning of EVA, suggesting that the long duration EVAs had negative effect on the ability to quickly respond to the sudden appearance of a stimuli. There was a trend of increasing anxiety/GAD7 scores at half time of the mission and post-mission. There were differences in NASA TLX and team cognition scores between subjects and at different time points, which will be further discussed in our upcoming publication.

The present results suggests that sub-components of individual and team cognitive functions may be differently affected during this extreme environment mission. Further research is needed to isolate which cognitive functions might be altered and how these may be correlated with stress level and workload to optimize mission success in extreme environments under high stress and workload.

For more photos and information about the NEEMO 23 mission, visit Csilla`s National Geographic blog or her website.