The Ketogenic Diet for Schizophrenia 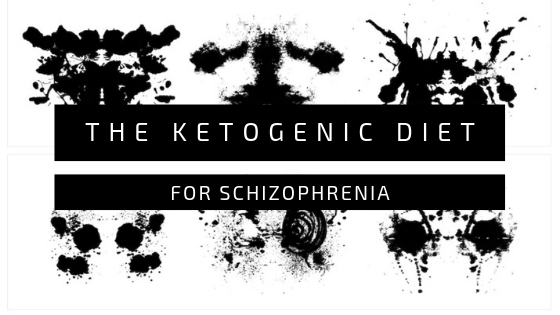 About 1% of people in the world have schizophrenia, a brain disease where people can’t perceive reality normally. Symptoms range from memory issues to hallucinations and social withdrawal. It’s not clear what causes it. In the 1960s schizophrenia was treated with poor efficacy and significant side-effects with drugs like haloperidol. Newer so-called atypical antipsychotics like Olanzapine do a better job at dealing with the symptoms of disordered thought and hallucinations but bring with them significant side-effects on metabolism, like high blood sugars and obesity.

Well-formulated ketogenic diets are starting to look like an alluring therapeutic option for patients with schizophrenia. First, it’s very safe. Second, ketone bodies (or ketones) have unique effects on how certain brain cells are powered, with direct relevance to psychiatric diseases. Ketones are produced when a person is fasting or when eating a diet that’s very low in carbs, high in fat and adequate in protein.

There are no randomized clinical trials (RCTs) putting schizophrenics on ketogenic diets. There are a few clinical studies looking at the effects of ketogenic diets on various metabolic measures which give decent hints as to whether or not a larger RCT is worth doing. Spoiler alert, it’s worth it!

Before taking a closer look at the science, let’s look at anecdotes and case-reports since these are often the seeds for large medical trials.

What do medical case-reports say about ketogenic diets and schizophrenia?

In 2017 Christopher M. Palmer from from McLean Hospital at Harvard Medical School describes two case-studies, a 33 year old man and a 31 year old woman. They both found immense benefit upon adopting a ketogenic diet [1].

The man went off his ketogenic diet at least 5 times and every single time his positive and negative symptoms worsened substantially within a day or 2. They remained worse until he returned to ketosis (as measured by urine ketone strips and/or weight loss).

The woman, with a history of anorexia nervosa but no longer anorexic, saw the following improvements after following a ketogenic diet for 4 weeks consisting “mostly of coffee, eggs, poultry, and lettuce”

No longer anorexic at this point and having fat to lose, another 4 months on the diet led to 30 lbs (13.6 kg) of weight loss. A higher PANSS score means the schizophrenia is more severe, and hers dropped down from 107 to 70 – that’s excellent! When she went off the diet she suffered from severe paranoia and persecutory delusions. She returned to the diet but with no improvements. She then decided to fast for 3 days, which deepens the ketogenic state, and by day 3 her delusions completely resolved.

What’s particularly interesting with these case-reports is that they serve as a sort of ‘natural experiment’; go on the diet, things get better, go off the diet, and things get worse. This is repeatable, in the same person and in at least 2 different people. It increases our confidence that the diet (or the metabolic state of ketosis) may be responsible for the observed improvements.

Another case-report comes from Dr. Westman & Kraft concerning a 70 year old white woman who had had delusions and hallucinations since she was 7 and was eventually diagnosed with schizophrenia when she was 17 [2]. Her typical diet was pretty poor, consisting of egg and cheese sandwiches, diet soda, water, pimento cheese, barbequed pork, chicken salad, Hamburger Helpers, macaroni cheese, and potatoes. She weighed 141 kg (311 lbs).

She started the ketogenic diet, instructed to eat no more than 20 net grams of carbs per day with unlimited meats and eggs, 4 ounces of hard cheese, 2 cups of salad vegetables and 1 cup of low-carb vegetables per day. What she actually ended up eating was beef, chicken, turkey, ham, fish, green beans, tomatoes, diet drinks, and water. Her ketones weren’t measured.

Interestingly, hints of schizophrenia improving upon adopting some sort of low-carb diet harken back to 1966. Dr. Dohan observed a correlation during the war, where the less bread was available the more hospital admissions for schizophrenia dropped [3]. Then there’s also the known association of celiac disease and schizophrenia [4].

There are more anecdotes of severe psychiatric diseases resolving upon adopting a well ketogenic diet. Even if not for schizophrenia specifically, there is the experience of Carrie Brown and Amber O’Hearn who both found relief from from ketogenic diets (Amber benefitted further from her carnivore diet). Unfortunately, their stories haven’t been written up in the medical literature given how they achieved this mostly outside of the conventional medical system.

What does the wider scientific literature have to say about ketogenic diets for psychiatric diseases?

The science on ketogenic diets for schizophrenia:

A study from 2017 reviewed online databases for terms like “bipolar disorder”, “schizophrenia” or “psychiatry” and concluded that “currently, there is insufficient evidence for the use of KD [ketogenic diet] in mental disorders, and it is not a recommended treatment option”[5].

This says more about the state of the scientific literature than it does answer the question of whether or not ketogenic diets can help people with schizophrenia. There are reasons to believe it may, like the fact that ketogenic diets favorably alter what’s called the redox state of our cells.

Technically speaking, our cellular redox state is our ratio of oxidized (NAD+) to reduced (NADH) nicotinamide adenine dinucleotides. Think of a good redox state as a properly firing set of circuits within your cells due to a balance in NAD+ and NADH. The more negative the redox state, the lower the oxidation power and the higher the oxidative stress, neither of which is good.

But is this a problem schizophrenics even have? Patients had their brain redox state measured by a technology called 31Phosphorus magnetic resonance spectroscopy (31P MRS) and it revealed that whatever phase of the disease they were in, they had a low redox state [6]. The signature was clear enough to distinguish it from controls or people with bipolar disorder (who are easily confused with schizophrenics).

There are few if any therapies that can reliably improve the whole body’s redox state other than ketogenic diets, calorie restriction or fasting. Ketogenic diets (especially well-formulated ones) and targeted fasting are the most sustainable solutions here, whereas calorie restriction is harder to do and carries significant side-effects. Drugs or supplements geared to increase cellular and mitochondrial NAD levels have so far failed to do so. It’s unclear if they cannot work, possibly because of interference by the liver as some have proposed [7].

Additionally, the ketogenic diet may also be acting to benefit diseased brains because it creates a low insulin environment. This is an excellent way of reducing macrovascular diseases like strokes. Strokes are much more common in diabetics, a population that benefits so much from ketogenic diets they can actually reverse their diabetes with it [8]. It follows that the diet is also effective for controlling high blood sugars. This is an excellent way of reducing microvascular diseases. Good blood sugar control also helps avoid significant brain atrophy, another signature of schizophrenic brains [9,10,11].

In 2015 the discovery was made that the ketone body D-beta-hydroxybutyrate has gene regulatory properties enabling it to dampen the activity of the NLRP3 inflammasome, an important machine in our cells that creates inflammation [12]. There is evidence the NLRP3 inflammasome is involved in schizophrenia [13]. Furthermore, schizophrenic patients have low brain BDNF levels, a crucial neurotrophic factor for retaining brain plasticity amongst many other roles [14,15]. And ketogenic diets have been shown to increase levels of this molecule in rats [16,17], with every reason to think this will be observed in humans too [18]. The ketone D-beta-hydroxybutyrate also increases BDNF 3-fold in cultures of human neurons [19]. Fasting and exercises also contribute to increased BDNF levels.

Adhering to ketogenic diets when suffering from a psychiatric disease like schizophrenia is no easy task in a food environment like ours full of flour, sugar and seed oils. Nevertheless, the ketogenic diet is safe, easy to understand and it can be tracked in a way no other diet can. More importantly though, it improves several aspects of metabolism and inflammation that have otherwise gone awry in schizophrenia.

Ketogenic diets are gaining clout amongst medical professionals, especially those with a penchant to optimize brain metabolism. Indeed, studies reviewing ketogenic diets for treating psychiatric disorders have generally been positive, even if tentative, in their conclusions given the current lack of large-scale clinical data [20].

With the last generation antipsychotics and cognitive behavioral therapy (CBT) having mostly failed to significantly impact the course of schizophrenia, it is crucial to remain open-minded to the promising potential of metabolic therapies (dietary or other) for treating psychiatric diseases.

Raphael Sirtoli is the co-founder of Nutrita, a website helping people grasp cutting-edge nutrition science. Nutrita is also a mobile app that helps people follow well-formulated low-carb diets as well as reach their health and performance goals. Raphael has an MSc in Molecular Biology and is currently pursuing a PhD in Health Sciences at the University of Minho. His day job however is neuroscience research at the Behavioral n’ Molecular Lab where he studies the metabolic effects of antipsychotics in rodent models of schizophrenia. His understanding of metabolism, nutrition and clinical medicine forms the base upon which Nutrita derives its evolving knowledge. He loves open scientific debate, Crossfit, football, hiking, psychedelic medicine, cold water immersion and cooking for loved ones.