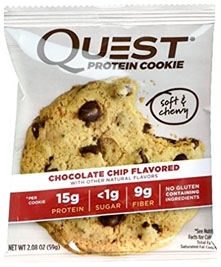 One of the goals of this blog is to share products that can make complying to a ketogenic or low-carb lifestyle more sustainable.

Since we always keep an eye out for new products we came across the Quest Protein Cookies that have less than 1g sugar and we jumped on this challenge to test them! We found them in our local Target store, the packaging is clean and stylish and the picture of the cookie is already appetizing, could not wait to get out of the store and start testing it. Do you know the feeling when you have a beautiful picture on the packaging but when you open it, the product you find inside does not even look like the photo on the package or e.g. half the size you expected? Well, this is not going to happen with you when opening the Quest Cookie package, the content did not disappoint. With this size (59g) the cookie can be a substitute of a meal, it is very filling and the taste is pretty amazing too: we did not even notice that it basically lacks sugar compared to regular cookies that are filled with sugar, wheat or high fructose corn syrup!

But of course, as scientists, we like data.  Luckily, we know some self-experimenters who were willing to share their personal results testing their blood glucose and ketone (beta-hydroxybutyrate, BHB) levels between equal amounts (59g) of regular store-bought sugar-containing chocolate chip cookies (control) and the Quest Protein Cookies – Chocolate Chip (CCC) and Double Chocolate Chip (DCCC) flavours. There are more flavours out there, but we tested only these two types for now. Six healthy, adult subjects (2 females and 4 males) self-reporting, not in ketosis at baseline, having not eaten or drank anything 3 hours prior to starting the experiment, sent us their results. They measured blood glucose and BHB before eating the cookies (baseline) and at 30 minute intervals after eating the cookies up to 120 minutes. Five responses were collected for each control and 6 responses for each Quest cookie flavour.

It’s well known that the less you spike glucose (and consequently insulin), the better – especially if someone is trying to maintain being in the state of ketosis by following a ketogenic diet, since a relatively small rise in blood glucose can rapidly prevent ketosis. We were curious whether the Quest cookies have an effect on blood glucose given that they contain less than 1g of sugar compared to the control cookies with  ~20g, and we wanted to see what kind of glucose responses occurred after cookie consumption in males and in females as well.

Here’s what we found: 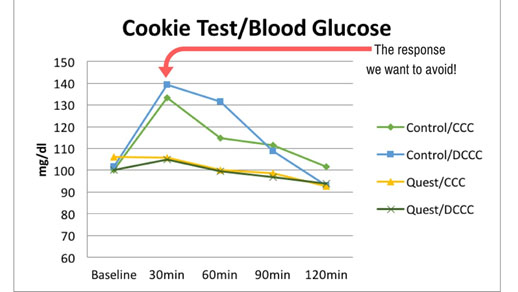 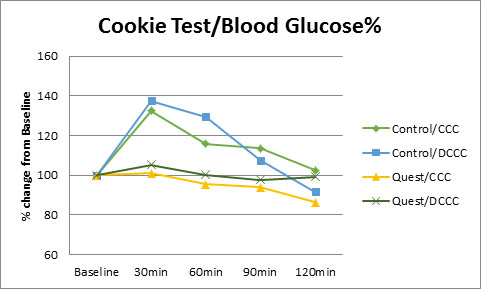 If having the lowest impact is how you win the game, the Quest protein cookies just won!

There is a clear difference between the blood glucose response from the control cookies and both Quest cookie types (Fig1-2.). While the control cookies caused a large increase in blood glucose within the first hour, as expected, both Quest cookie flavors had little or no impact and actually caused a slight decrease, proving that for the purpose of minimizing spikes in blood glucose, Quest protein cookies can be consumed for that very reason. 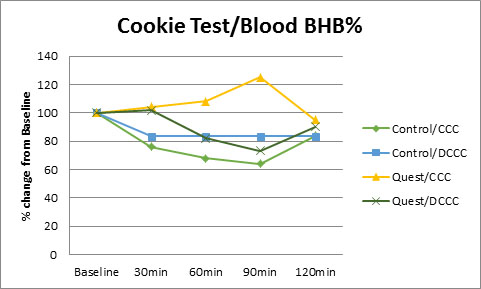 The control cookies caused BHB levels to drop, inversely related to their effect on blood glucose, as would be expected (Fig. 3-4.). When blood glucose rises, insulin is released and consequently ketogenesis, or the production of ketone bodies, is inhibited. The two types of Quest cookies had somewhat different results, one causing a slight, initial rise and then drop in BHB (CCC), and the other the opposite (DCCC), although these changes were pretty small and in case of Quest DCCC the BHB level even returned to baseline after 2 hours. Given that the subjects were not in a state of ketosis at baseline and the experiments started with low BHB levels, this info is somewhat limited for those not following a ketogenic diet. However, based on these observations we would not expect much decrease in BHB levels even if someone started from the state of ketosis, but we did not test this scenario yet. All together we can say that Quest cookies are not anti-ketogenic, as apposite to nearly all other cookies on the market. In that way, when consumed in moderation (try to resist the urge to eat cookies all day) they can even be part of a ketogenic diet.

What can you take away from this?

If you are trying to keep blood glucose fluctuations to a minimum but still want to indulge in a tasty treat, Quest protein cookies have clearly proven their case as being an option. Stable blood glucose will give you sustained energy throughout the day without triggering brain fog and sugar cravings a few hours later.

In terms of their use in the ketogenic diet, they are certainly a great low-carb option and also provide a decent amount of fat (17g per cookie) and low enough amount of carbohydrates to likely sustain a state of ketosis. Even if subjects were in a state of ketosis at baseline, by speculation we wouldn’t suspect a significant decrease in BHB, although we need more long term self-reporting testing to prove that! So, while the Quest protein cookies are not by definition ketogenic, we still think they are a tasty and healthy option for someone following a ketogenic diet.

Moral of the story: you CAN have your cookie and still stay healthy!