Will the Ketogenic Diet Destroy Your Thyroid?

Thyroid hormones are essential for proper growth and development, they function in almost every cell in the body, and play a fundamental role in regulating our metabolism and resting energy expenditure (i.e. the energy you burn if you were to just stay in bed all day). 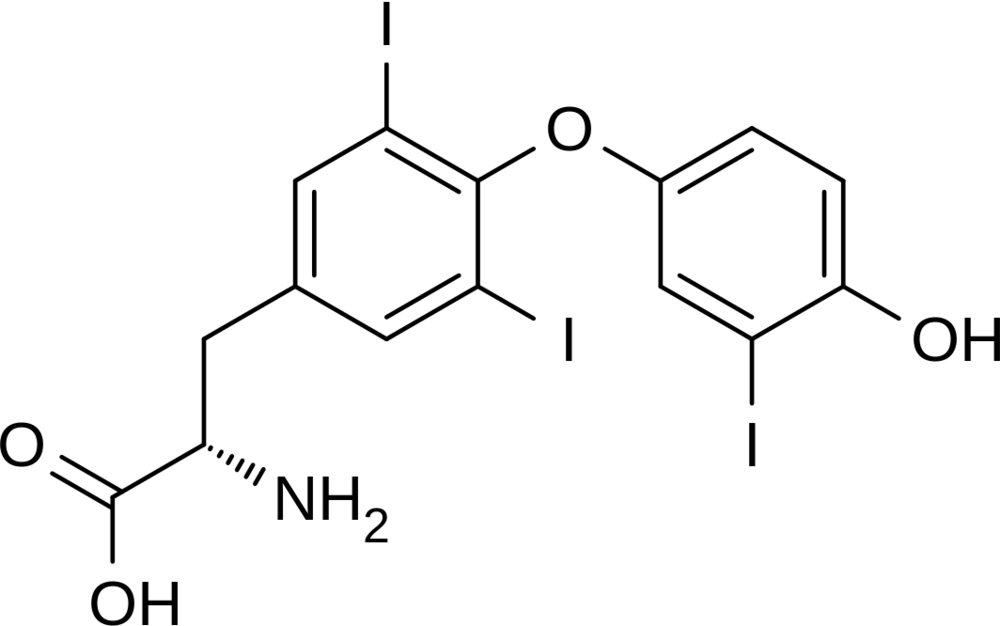 It is no secret that diet can influence thyroid hormone levels, and that low-carb diets may induce these changes. Regardless of dietary composition though, starvation and severe calorie restriction is associated with reduced thyroid function. This is a survival mechanism in response to perceived famine, to slow metabolism, preserve energy, and prevent wasting away [1]. The influence of dietary composition on thyroid hormone levels, independent of calorie restriction, remains controversial. If the ketogenic diet mimics the physiological state of fasting, even without calorie restriction, then one might assume that our hormones would respond as they would under starvation.

The blogosphere likes to point fingers and say with assertion that the ketogenic will destroy your thyroid, and there simply is just not enough research to support this claim. A lot of these assumptions are based on low-carbohydrate studies that are severely calorie restricted. There are no peer-reviewed studies in humans showing that a well-formulated ketogenic diet causes thyroid impairment. So, why is keto getting the blame?

Before jumping into the research here’s a short overview of the thyroid system: 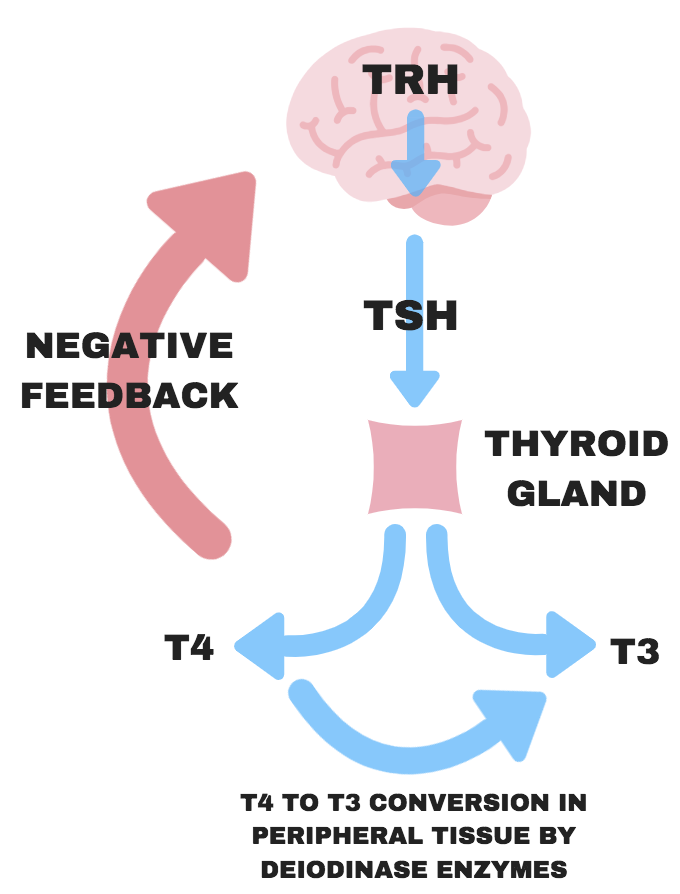 Carbohydrate-restriction and the ketogenic diet can cause a drop in active thyroid hormone (T3), when calories are restricted and even when calories are kept at maintenance. However, a drop in T3 does not automatically mean you have an under-active thyroid or that you are on the path to hypothyroidism. Hypothyroidism is characterized not only by a drop in T3 but a drop in resting energy expenditure/metabolic rate, abnormally high TSH levels (body’s way of asking for more T4, to make more T3), and abnormally low T4 levels. Following a drop in T3, we should expect a drop in metabolic rate, however with the research available in context of a ketogenic diet, this is simply not shown. We know that keto-adaption goes far beyond just switching out fuel sources, the ketogenic diet has been shown to improve insulin sensitivity, reduce inflammation, improve leptin sensitivity, the list goes on. So, could it be the case that under keto-adaptation our thyroid functions normally with different hormone levels? For example, lower insulin and T3, but higher insulin sensitivity. Maybe the case here.

Here’s what the research shows:

Two studies in children with epilepsy:

There is only one study claiming that the ketogenic diet is associated with hypothyroidism. In this study, thyroid hormones were examined in 120 drug-resistant epileptic children following a ketogenic diet for 1-year [2]. They diagnosed 16.7% of the children with hypothyroidism and had them put on thyroid medication (L-thyroxine). The primary risk factors for developing hypothyroidism were elevated baseline TSH values (26.9 times more likely) and female gender (3.7 times more likely). Based on this data they concluded that the ketogenic causes thyroid malfunction. A major limitation to this study was the failure to consider the thyrotoxic effect of previously administered anti-epileptic drugs, likely contributing to the elevated baseline TSH values, which influenced the response to the ketogenic therapy. They even noted in the paper that in some of the children the ketogenic diet may have normalized thyroid function from anti-epileptic drug-induced thyroid impairments. It would have been interesting to see the results if any signs of hypothyroidism (such as elevated baseline TSH values) were corrected before beginning the ketogenic treatment.

Another study looked at thyroid hormones in 28 children with intractable epilepsy aged 6-10 years old following a ketogenic diet for 1.9-years [3]. They found that from baseline to last visit, overall thyroid function showed no significant change and that patients were asymptomatic for hypothyroidism. They did see decreased free T4 levels and increased TSH levels in children with younger seizure onset, earlier initiation of KD, and higher levels of cholesterol and triglycerides, and suggested monitoring thyroid function in children with these risk factors.

In one study comparing low-carb (LC: 33% carbohydrate) vs high-carb (HC: 71% carbohydrate) very-low-calorie diets (530 cals) for 4-weeks, T3 declined equally for both groups (more gradual drop in high-carb group) [1]. At week-4, Resting Metabolic Rate (RMR) had decreased more in the high-carb group (20.7%) compared to the low-carb group (12.4%), showing a disconnect between T3 levels and metabolic rate in context of low-carb.

In 2002, Jeff Volek published a study where subjects followed a very low carbohydrate diet (8% carbohydrate) for 6-weeks [4]. While they did not measure T3 or T4, there was a significant loss of body fat and increase in lean body mass, despite eating at a slight (voluntary) calorie deficit. The average reduction in calories was ~205kcal/day, which over 6-weeks would predict a weight loss of 1.1kg, however weight loss of 2.2kg was observed, where body fat accounted for all weight lost. Hypothyroidism is associated with difficulty losing body fat, which was clearly not the case here.

A similar study conducted in 6 subjects following a ketogenic diet for 6-weeks showed a significant decrease in T3, however no change was seen for T4 [5]. Under hypothyroid conditions, T4 should rise in response to low levels of T3, but as mentioned, T4 levels did not change, in fact, they decreased slightly. In other words, the body was not asking for more T3 despite the decrease.

In another one of Stephen Phinney’s studies, 9 lean men were put on a eucaloric ketogenic diet for 4-weeks, and similar to the study mentioned above, they reported a significant decrease in T3 [6]. However, here they measured metabolic rate and found no association between the decline in T3 with resting oxygen uptake (metabolic rate), they also reported no symptoms of functional hypothyroidism. More evidence to support the lack of association between T3, metabolic rate, and symptoms of under-active thyroid in context of low-carb/keto-adaption.

Lastly, this short study lasting 11-days, compared three groups: high carb (85%), control (44%), and very low carb (2%) diets [7]. Calories and protein were equated in each group and calories were set for weight maintenance. The authors reported decreased plasma T3 levels and increased reverse T3 (inactive T3), free T4, and T3 uptake values for the low-carb group. However, they found no change in TSH levels, nor did they see a change in resting energy expenditure, both of which should change if hypothyroid. They concluded that carbohydrate deprivation is different from the known effects of total starvation.

Possible explanations for why keto-adapted individuals or those following low-carb diet are able to get by with lower levels of T3, without showing other symptoms or biomarkers of hypothyroidism:

3.     Lower T3 levels have been associated with a protein-sparing effect, therefore this could be part of keto-adaption to prevent the break-down of muscle [8]

The ketogenic diet is more than just eating high-fat and low-carb. The quality of fats you eat matter, too. A well-formulated ketogenic diet includes high quality sources of fat (preferably low in omega-6 PUFAs) – when choosing oils opt for cold-pressed and virgin/extra-virgin and avoid refined-seed oils (e.g. canola, corn, soybean, sunflower, safflower, cottonseed). Lipid peroxidation (i.e. degradation) of our cell membranes, such as that associated with high consumptions of omega-6 PUFAs, has been associated with primary hypothyroidism [10]. In addition, a ketogenic diet based heavily on omega-6 PUFAs can actually be pro-inflammatory, and there is evidence suggesting an association between hypothyroidism and low-grade inflammation [11]. However, a well-formulated ketogenic diet promotes reduced inflammation through various mechanisms, which can contribute to better thyroid health.

It’s not fair to say that the ketogenic diet does, or does not, cause any unfavourable changes to your thyroid hormone levels, because no blogger knows what YOUR ketogenic diet looks like, how many calories you eat, and other lifestyle factors that undoubtedly play a role in your hormones. What is fair to say is that if the ketogenic diet was causing hypothyroidism, it would be a lot more evident in the research that has been conducted to date.

At the end of the day,

you have to listen to your body. If your T3 levels have dropped but your other thyroid markers are normal, and you FEEL GOOD (important factor!), there isn’t much to be concerned about. If you are experiencing the telling signs of hypothyroidism such as weight gain, trouble regulating your temperature, constant fatigue, etc. then maybe it’s time you see your doctor. Based on the research available, keto-adaption causes incredibly unique physiological responses in the body. You know what’s also unique? YOU. That’s why it’s important to individualize your nutrition, get your blood markers tested when you can, and be in tune with your body. It’s obvious that more research is needed in this area, and we hope to see more published data soon.

While writing this article, we received a very fitting email. A woman shared her story of battling thyroid issues for the past 4 years, and within 3 months on a ketogenic diet her thyroid hormones improved to the extent of her doctor taking her off her thyroid medication. We understand that success stories such as this one will not apply to everybody, but we are just trying to shine a little light on some of the misconceptions surrounding a ketogenic lifestyle.