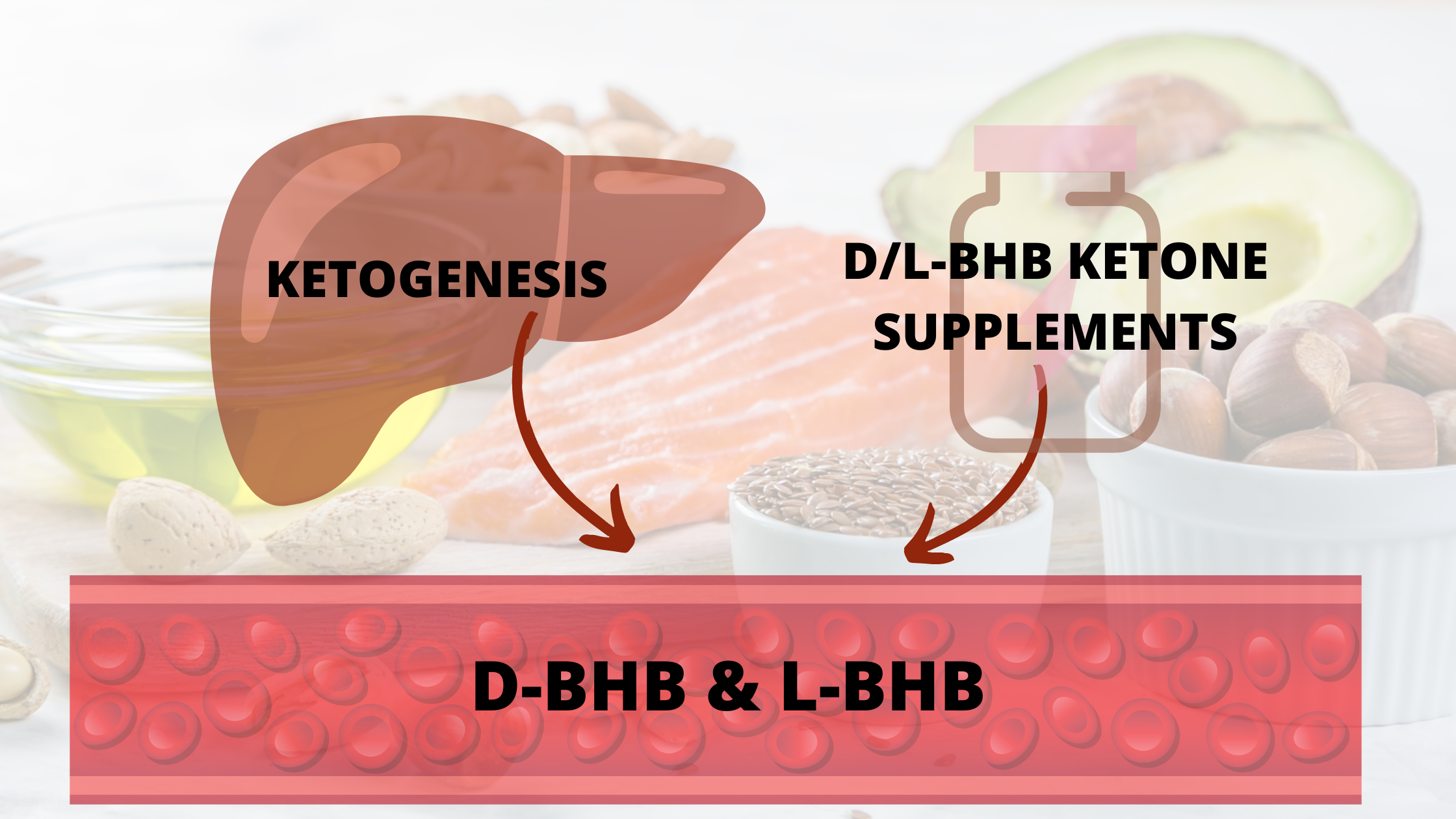 Ketones are produced by the liver under conditions of low glucose availability for extended periods of time, such as a prolonged fast (24-hours+) or days on a very low carbohydrate ketogenic diet. An elevation of ketone bodies is what defines ketosis. In ketosis we are producing three different ketone molecules: acetoacetate (AcAc), acetone, and the primary ketone body in circulation, which we produce the most of, is beta-hydroxybutyrate (BHB).

BHB is a chiral molecule, which means it exists in two forms that look almost identical, but are actually mirror images of each other. If you place one hand over the other, you’ll see what we mean. Palms facing are mirror images, but stacked on top of eachother, they are different. These two forms are referred to as D- or R-BHB and L- or S-BHB, but we will refer to them as D- and L-BHB going forward.

The body produces almost exclusively D-BHB; it is the form of BHB broken down to supply energy to the brain and peripheral tissues in the form of ATP. L-BHB only accounts for around 2-3% of endogenous BHB production in the fasted state. This has led many to believe L-BHB is a mere bystander and brush off its potential to serve important purposes in the body. However, there is research to suggest that L-BHB not only plays a role in metabolism, but has roles beyond this inert function as an intermediate in beta-oxidation of fats.

Another important aspect to mention why L-BHB might have been overlooked, is that the commercially available ketone monitoring devices only measure D-BHB, thus when consuming racemic (D/L-BHB) electrolyte salts plasma L-BHB levels are elevated, but non-detectable with blood ketone meters. In addition, it has been shown that after infusing L-BHB in rats, the molecule can be re-converted to D-BHB (~20%) and thereafter used for energy production.

It’s also worth mentioning that L-BHB hangs around in the blood longer than D-BHB does, it was shown to be metabolized more slowly, suggesting that a ketone supplement that contains both L- and D-BHB could result in more sustained/prolonged elevation of blood ketones. In fact, this was demonstrated in a study where despite having slightly lower ketone concentrations, compared to taking D-BHB alone, the racemic mixture led to elevated ketones sustained for nearly 5x longer (90 minutes vs 20 minutes).

Most studies on ketones focus on D-BHB, and the actions of L-BHB are less defined, but there is emerging data supporting that both D- and L-BHB are important, especially in regards to ketone-induced signaling, and that more research is needed to fully understand the differences in their roles.

A lesser known fact about ketones is that they serve not only as an obligate (not simply an alternative) fuel for the brain during development, but as precursors for synthesizing essential brain lipids. In a study in rats, -when compared to D-BHB-, L-BHB was the preferred carbon source for synthesizing cholesterol and fatty acids for the brain, spinal cord, and kidney. Interestingly, the brain will make its own lipids rather than taking them out of circulation (with the exception of essential fatty acids like omega-3s). Ketones cross the blood brain barrier where they can provide the building blocks for these components, and it’s possible that L-BHB is contributing to this.

Cell culture studies show that both L- and D-BHB bind to the HCAR2 receptor (hydroxycarboxylic acid receptor 2), also known as the GPR109A receptor. This receptor is expressed in our fat cells, neutrophils, macrophages, and other cells in the brain, and its activation leads to a cascade of events that dampen our inflammatory response by inhibiting cytokine production. This is one way ketones may suppress inflammation.

Another way L-BHB interacts with our immune system and may lower inflammation is by directly inhibiting the activation of the NLRP3 inflammasome, which has also been shown in cell culture studies. This study showed that this anti-inflammatory effect occurred in the presence of both D- and L-BHB. This can have important implications when considering that L-BHB stays in the bloodstream longer, and thus greater potential for suppressing chronic systemic and neuroinflammation.

Fate of L-BHB when consumed as a racemic ketone supplement

Given that some ketone supplements contain the racemic form of BHB (containing both L- and D-BHB), it is important that more research addresses their overlapping and individual roles in the body. A recent study administering a racemic (D,L-BHB) ketone salt showed differences in uptake and utilization of the two isomers in patients with multiple acyl-CoA dehydrogenase deficiency (MADD) and in healthy rats. This was the first UPLC‐MS/MS‐based enantiomer‐specific pharmacokinetic study of D,L‐BHB. The distribution of the two isomers were measured in the rats throughout different tissues without supplementation and after oral administration of D,L-BHB. In animals without treatment (control) the D‐BHB concentrations exceeded the L‐BHB concentrations in all tissue, L-BHB was ~5-10% of total BHB concentration in muscle, liver, and brain , and was most elevated in the heart (24% of total BHB concentration). However, after a single, high dose of D,L-BHB they found a considerable increase of L‐BHB in all tissues, including notably in the brain, whereas the increase in D‐BHB was only found in heart and liver tissue, and barely noticeable in brain and muscle, as depicted in the figure below.

Figure caption: The enantiomer‐specific tissue distribution after a single, oral dose of D,L‐BHB in rats. The concentrations of D‐BHB and L‐BHB in brain, heart, liver, and muscle of control animals (white dots) and after oral sodium‐D,L‐BHB (black dots). Source: van Rijt et al., 2021.

This study shows an important aspect of L-BHB supplementation, as L‐BHB concentrations increased extensively in the brain, heart, liver, and muscle tissues, whereas a less intense increase in D‐BHB was observed only in the heart and liver.

These findings show that D- and L-BHB have different rate of absorption and distribution across tissues and different metabolic fates which could have important implications for therapeutic applications, and further research should address how ketones influence each tissue differently.

As mentioned, some ketone salt supplement products come in the racemic form containing a mixture of D- and L-BHB of varying ratios. Other products however come as pure D-BHB, which may be advantageous in some scenarios, but would reduce the potential for L-BHB-induced signaling effect. You will often hear people refer to L-BHB as the “non-physiological” form of BHB, but the emerging research suggests it is indeed active in the body, and may confer important signaling effects through inflammation suppression and perhaps epigenetic signaling. In regards to human studies, the dosing of BHB used clinically (IV) ranged from 10-100g/day, with most clinical IV studies using racemic (D/L-BHB). For example, studies showing enhanced cerebral blood flow and improved working memory performance (reversing insulin resistance) have been observed. Future mechanistic research to address BHB enantiomer-specific signaling roles will guide us on applying the optimal ketone formulations (and dosing) for not only brain health, but cardiac function, respiratory health, kidney health, preventing muscle breakdown, and enhancing overall metabolic health and disease prevention.