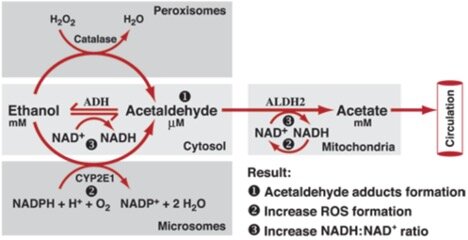 From a glass of champagne on New Year’s Eve, to a beer while watching America’s favorite pastime, to going out with friends after a long day of work, alcoholic beverages have long been a drink of choice of the American Culture. Alcohol culture in America has even survived illegalization during the 1920-1933 prohibition. Despite its establishment in American Culture, its use (or overconsumption) has many deleterious consequences that have been well established, such as liver cirrhosis, multiple malignancies, vitamin deficiencies, pancreatitis, and both acute and chronic neurological sequelae, to name a few. An area that we at KetoNutrition wanted to delve into a little further is how alcohol affects metabolism. Specifically, in the following paragraphs, we will go further into alcohol and how it affects weight, body composition, performance and metabolic parameters.

Similarly to the consumption of alcohol, obesity has also become a commonality of American culture, with the United States boasting an obesity rate of over 40%. Along with the increases in rates of obesity, we are also having increased rates of metabolic diseases such as diabetes and hypertension. The increases in American obesity rate poses the question, “why?”. Though there are many confounding and modifying factors, the simple answer is there is a discord between energy intake and energy output. The standard unit of measurement used to quantify the energy in food is the calorie. If you take in more energy (calories) than you expend, you gain weight and vice versa.

Now that we have spoken how alcohol contains energy (calories) let’s consider the metabolism of alcohol and how it acutely affects other metabolic pathways. When alcohol is ingested, it makes its way to the liver where metabolism occurs. Here, there are two primary players, the enzymes alcohol dehydrogenase and aldehyde dehydrogenase. Alcohol dehydrogenase catalyzes the reaction of alcohol to acetaldehyde. Aldehyde dehydrogenase then catalyzes the reaction from acetaldehyde to acetate, which is then broken down to water and carbon dioxide. These reactions require the anion NAD+ (nicotinamide adenine dinucleotide) which is converted to NADH through each reaction. Other enzymes may also assist with the metabolism of alcohol, such as CYP2E1 and catalase, but this is beyond the scope of this article.

As stated, during the metabolism of alcohol, acetaldehyde is an intermediate byproduct that is potentially toxic. Many of the harmful effects of alcohol can be explained by acetaldehyde, which is why alcoholic hepatitis and liver cirrhosis are frequent complications in alcoholics, given that most of alcohol metabolism occurs in the liver. Metabolism can also occur in the brain, pancreas, and gastrointestinal tract, which exposes these tissues to the negative effects of acetaldehyde, allowing for damage to also occur in these organs.

The toxic effects of acetaldehyde are also implicated in the infamous “hangover” the day following alcohol consumption. Interestingly, individuals have different variations in the enzymes alcohol dehydrogenase and aldehyde dehydrogenase, allowing for more or less efficient metabolism of acetaldehyde, which can make drinking more or less pleasant and predispose specific populations to alcoholism1.

What about other macronutrients?

Hyperglycemia, or high blood sugar, is a common sequela of alcohol consumption. When we drink, we tend to consume beverages with high carbohydrate and sugar content – a common culprit of increased blood sugar levels. We also tend to snack and make worse food choices. However, alcohol can also predispose individuals to hypoglycemia. One way that the body maintains glucose homeostasis is through gluconeogenesis, which is the creation of glucose from non-carbohydrate substrates. As previously mentioned, NADH is increased relative to NAD+ during alcohol metabolism. NAD+, however, is needed during gluconeogenesis, and thus, alcohol can inhibit gluconeogenesis. This has potentially serious implications for everyone, especially in individuals with pathologies affecting glucose metabolism and taking exogenous medications that can raise or lower blood sugar. It’s possible that the glucose-lowering effect of lower-dose alcohol consumption may have positive effects, especially if consumed in small amounts before a meal.  Using a continuous glucose monitor (Levels CGM), we have been able to demonstrate the glucose-lowering effects of certain types of low-sugar alcoholic beverages.

Similar to the effects on carbohydrate metabolism, the elevation in the NADH/NAD+ ratio can inhibit the oxidation of fatty acids, as the generation of NADH occurs through fatty acid oxidation. Moreover, the elevations in NADH may increase fatty acid synthesis. Since the metabolism of alcohol predominantly occurs in the liver, this can lead to hepatic steatosis, also known as “fatty liver”. Furthermore, acetate that is created during alcohol metabolism has antilipolytic properties.

A particular study assessed individuals following a bout of exercise, and subjects were either given protein, alcohol-protein combination, or carbohydrate-protein combination following the exercise. The study demonstrated that alcohol, even when paired with protein, reduces the rate of protein synthesis following exercise. Another study showed that “alcohol is toxic to striated muscle in a dose-dependent manner” and that alcohol and the byproducts of its metabolism can lead to muscle atrophy. This is not only the case with skeletal muscle but can occur in cardiac muscle leading to cardiomyopathy. Aside from the direct effects on muscle cells and protein synthesis, alcohol also can affect the absorption of amino acids that we consume. More recently, a study investigating the “Influence of daily beer or ethanol consumption on physical fitness in response to a high-intensity interval training program. The BEER-HIIT study” demonstrated that lower-dose alcohol intake (relative to other studies) does not mitigate the positive effect of a 10-week HIIT on physical fitness in young healthy adults.  Taken together, low to moderate alcohol consumption (1-2 small drinks/day) has little effect on body composition or performance.

Aside from the many effects that alcohol has on the metabolism of other macronutrients, alcohol influences the metabolism of micronutrients. Alcohol is closely associated with many vitamin deficiencies such a vitamin B1 (which can lead to Wernicke-Korsakoff syndrome), B12/folate (which can lead to anemia, among other things), and fat-soluble vitamins. Alcohol has also been associated with certain mineral deficiencies as well, through various mechanisms. Keep in mind that these effects are typically associated with alcohol overconsumption and not low-volume alcohol consumption, or just occasional moderate drinking.

Based on the information above, one would assume that since alcohol is an energy dense macronutrient that affects the metabolism of other macro/micronutrients, it would lead to weight gain. However, the answer is not as straightforward. Certain studies have shown that alcohol leads to weight gain, while others have demonstrated that alcohol consumption leads to weight loss or no change. Many factors come into play regarding alcohol’s effect on body composition such as delayed gastric emptying, decreased leptin levels, its effect on insulin sensitivity, its effect on nutrient absorption, its effect on testosterone levels, lowered inhibitions while intoxicated, leading to less healthy and higher quantity food consumption, less desire to exercise the day following drinking alcohol, and many others. In summary, alcohol affects most aspects of energy metabolism, and overconsumption is associated with many deleterious health concerns.

The good side of alcohol

With all that’s been said, most research on alcohol use is often in the context of overconsumption. With its deep historical roots, alcohol may play a role in enhancing psychological well-being, which is known to affect our physical well-being. A comprehensive meta-analysis (adjusting for confounders) found that low-volume alcohol consumption has no net mortality risk (or benefit) compared to lifetime abstention or occasional moderate drinking. There are reasons why low to moderate amounts of alcohol might have its place in a healthy diet and lifestyle, including the social and cultural aspects of drinking. Like food, alcohol can often serve to bring friends, family, and even strangers together, and there is research supporting its role in enhancing social bonds. At the heart of social bonding lies the endorphin system, and there is an established link between alcohol and endorphin release, which can also aid in relaxation. Of course, this all goes without saying that alcohol should not be abused for such reasons, nor should it act as a crutch for reducing stress. Instead, we believe there can be a time and place for appropriate (small amounts of) alcohol use to celebrate life and health at the same time.

The importance of quality (wine)

The type of alcohol you consume is especially important, especially when it comes to wine. If you are going to drink, we at KetoNutrition suggest Dry Farm Wines . We have found that one glass (6 oz) of these lab-tested, organic, sugar-free, and lower alcohol wines with no chemical additives or preservatives has little or no effect on glycemic variability and even tends to decrease glucose response to a meal  (measured with Levels CGM).  Also, no effect on sleep quantity or quality  with low-volume wine consumption. These aspects make a difference in how wine affects the body and, in turn, makes you feel. Especially the sugar content, which can be surprisingly high in most commercial wines due to skipping steps in the fermentation process to get product to shelves. Altogether, there is an art and science to natural wines that Dry Farm Wines have accomplished, rarely met by commercial wines. Their extraordinarily high standards – with only ~20 wineries in the USA meeting their criteria as a natural wine – truly sets them apart from other wines.

To wrap it up, alcohol often gets a bad rap, but the dose, frequency, and type of alcohol make the poison.

19.       Todd White – Your Health: The Dirty Secrets of the Wine Industry. https://www.youtube.com/watch?v=jr1nlDZt3kk

Disclaimer: KetoNutrition Blog articles are for general informational purposes only and do not constitute nutrition advice or medical advice. The use of information on this blog or materials linked from this blog is at the user’s own risk. The content of this blog is not intended to be a substitute for professional advice.