Caffeine is one of, if not the most popular drug used in America, consumed by over 80% of US adults. As a result, it is also an extremely well-studied compound. Most caffeine is consumed as coffee; however, caffeine is also found in chocolate, soft drinks, energy drinks, sports supplements, and more recently, caffeine and ketones supplements.

In this article, we discuss:

A brief background on caffeine metabolism

Caffeine is absorbed into the bloodstream within an hour after consumption, but its absorption rate depends on what it is consumed with (slower with meals). Its half-life is generally between 3- to 5-hours, which means it has a relatively long-lasting effect on the body. However, there is a considerable individual variation with the rate of clearance that may depend on diet and genetics. Some metabolize caffeine much quicker than others!

When it comes to amounts, caffeine doses vary widely depending on the source. Low to moderate amounts fall in the range of 40 to 300 mg (~0.5 – 4.0 mg/kg). It appears that daily consumption of up to 400 mg of caffeine does not pose a health risk to healthy individuals. Some supplements and energy drinks provide up to 500-600 mg of caffeine per serving, which is alarmingly high. In many cases, the amount of caffeine is not disclosed, which is concerning and is something to look out for, which we address in more detail below. 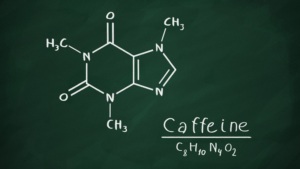 Research has shown that caffeine is more than just a stimulant and has been long-known for its unique effects on metabolism. In fact, caffeine appears to have a similar impact on the liver to a ketogenic diet or fasting.

Caffeine activates pathways that promote the breakdown of fat, otherwise known as lipolysis. Lipolysis increases the amount of free fatty acids in the liver, which can be used directly as fuel, or if oxidized in large amounts, can promote the production of ketones. Similar metabolic processes occur when we fast or follow a ketogenic diet.

In a series of four trials, caffeine was shown to increase both fat oxidation and metabolic rate in the three hours following consumption (4 mg/kg). Interestingly, however, this study revealed that obese individuals do not experience an increase in fat oxidation with caffeine, which may have something to do with impaired metabolic flexibility. That said, metabolic rate still increased in these subjects. In this study, they also found that caffeine, even in very high doses (8 mg/kg), did not affect blood glucose or insulin levels.

With interest in whether caffeine could be a potential ketogenic agent, in a 2017 study they found on 10 people that caffeine given at breakfast stimulated ketone production in a dose-dependent fashion (2.5 and 5.0 mg/kg). In other words, those who consumed the most caffeine had the highest ketones, even in the presence of carbohydrates. Ketones were measured after 2-4 hours and were about twice that seen after an overnight fast.

Collectively, it’s likely that caffeine synergizes nicely with a ketogenic diet by supporting and accelerating the breakdown of fat and conversion of that fat to ketones.

Besides caffeine’s benefits on metabolic rate, fat oxidation, and ketone production, caffeine offers several other advantages, whether you are following a ketogenic diet or not. Still, the benefits of caffeine may complement the benefits of nutritional ketosis.

Most people are already aware of the stimulating effects of caffeine. Many of us rely on a cup of coffee in the morning to wake us up and get us going; we use caffeine to stay awake throughout the day or into the night when deadlines are upon us. It is because of these effects that caffeine is unsurprisingly considered a nootropic, meaning it supports brain function. The primary mechanism of action is blocking adenosine receptors and therefore antagonizing the effects of adenosine, since adenosine gradually accumulates over the day and increases drowsiness. As a stimulant, low to moderate caffeine consumption can boost energy, improve concentration, and alertness. Perhaps this is why many of us get our best work done in the morning hours, fasted and caffeinated. That said, at high doses (>400 mg), this stimulatory effect can cause anxiety in some people.

The effects of caffeine on learning and memory are mixed, with some showing benefit and others showing no change. However, caffeine’s effect on alertness and attention could improve learning ability. Interestingly, epidemiological studies have shown a link between long-term caffeine consumption and a significantly lower risk of dementia and Alzheimer’s disease.

There is also research supporting the use of caffeine in situations of sleep-deprivation. Doses of 200-400 mg may help overcome the physical and cognitive deterioration associated with short periods of sleep loss. On the flip side, since doses of over 100 mg can delay the onset of sleep, it’s essential to consider the timing of caffeine intake to avoid disrupting your sleep.

Since nutritional ketosis is widely known for its brain-boosting effects, likely, the combination of ketones and caffeine can further benefit mental performance, but this is yet to be studied. That said, many of us who use exogenous ketones and coffee simultaneously may be experiencing the added benefits of ketones + caffeine without even knowing it!

Caffeine is commonly used in athletics as an “ergogenic aid” (i.e., performance enhancer) to give them that extra push they need. Because of this, caffeine is found in several sports supplements and pre-workouts. Caffeine has been found to enhance several forms of exercise, including endurance, high-intensity sports, and strength-power performance. These benefits are typically achieved with doses in the range of 250 to 500 mg, consumed around an hour before training. Take into consideration that consuming caffeine while fasted may require lower doses than with food, due to the effect of food on absorption rate.

A synergistic effect of ketone supplements and caffeine may also exist for athletic performance. Ketone supplements alone are increasingly researched in the context of sports performance, and there is evidence to support a possible performance-enhancing effect, especially for endurance exercise. In a recent study, a pre-workout supplement containing both exogenous ketone salts and caffeine (100 mg) was found to increase high-intensity exercise performance in both keto- and non-keto-adapted individuals. If you are using a ketogenic diet or exogenous ketones to enhance your athletic performance, caffeine may provide extra benefits. Unfortunately, this study didn’t compare the effects with and without caffeine, but based on the outcomes of caffeine and ketones alone, it’s certainly not outside the realm of possibility.

As previously mentioned, caffeine consumption of up to ~400 mg per day is considered safe for adults. Too much caffeine, however, can give you the shakes (e.g., caffeine jitters) and upset stomach. According to the Mayo Clinic, heavy caffeine consumption (500-600 mg per day) may cause headaches, insomnia, nervousness, irritability, frequent urination, rapid heart rate, and/or muscle tremors. There also appears to be a point of diminishing return when it comes to performance. High doses of caffeine (450-750 mg) have been found to degrade cognitive and athletic performance, possibly due to increased anxiety and GI distress. Importantly, and as previously mentioned, caffeine can cause significant sleep disturbance. Since sleep is essential for optimizing metabolic, brain, and overall health, caffeine consumption later in the day is highly discouraged, especially if caffeine-induced sleep disturbances lead to a cycle of increased consumption of caffeine to counter the fatigue.

These doses of caffeine are unlikely to be reached with dietary sources alone. Therefore, concern should otherwise be considered when taking supplements containing caffeine. Some products will combine ketones with caffeine owing to the additional energy boost and effect on fat oxidation that caffeine has to offer. Some ketone supplement products take it a little too far, adding amounts of caffeine that, to us, raise concern (~240-320 mg). When choosing a ketone supplement, make sure that the main ingredient is ketone and not caffeine; otherwise, it would be a lot cheaper just to drink a few cups of coffee. If the caffeine content in your ketone supplement is undisclosed, that can also be a warning sign.

Dangers of caffeine in ketone supplements for children

The above regard for high amounts of caffeine in ketone supplements is especially important to consider when administering to children. Many children take exogenous ketones to manage disorders that benefit from nutritional ketosis. Children may be more vulnerable to the adverse side effects of too much caffeine. This can lead to a host of health concerns, such as early caffeine dependence, behavioral problems, sleep disturbances, and may even affect brain development.

Caffeine may enhance or complement the benefits of nutritional ketosis, whether induced with a ketogenic diet or exogenous ketone supplements. Both caffeine and exogenous ketones have been shown to enhance both mental and physical performance, and there is reason to believe the two may complement each other when consumed together. Owing to this potential, many ketone supplements contain added caffeine for an extra boost. It is crucial, however, that you always read the ingredients and caffeine content per serving, as too much caffeine is associated with several adverse effects. Moreover, some ketone products may use only small amount of ketones with very high amount of caffeine and they attribute the increased energy to ketones when it might be the effect of the high amount of caffeine. Finally, it is imperative to consider caffeine content in a ketone supplement when given to children due to their increased vulnerability to caffeine’s side effects.